The icy water surface of the flooded gravel pit is full of piping teal and wigeon, mallards, barnacle and pink footed geese, ascending lapwings and clouds of circling black headed gulls.  Silent and hidden among broken reeds and rushes, the snipe are hunkering down.  The stripes down their backs almost completely mimic their surroundings. A shrill cry above from a possible predator catapults birds into the air, but snipe stay still.

Snipe in the rushes: pen and watercolour

The soft winter evening light glows off their plumage and the myriad stripes of surrounding vegetation. 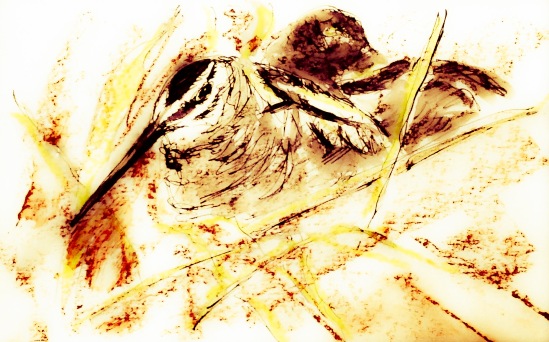 Snowy white herons called egrets are a little exotic in Britain but are common in Mallorca.  I cycled past fields in which cattle egrets co-existed with sheep and past a stone cistern hosting lines of egrets round the rim.  These sketches were done of birds roosting and hunting in the waters of the nature reserve, spotted by telescope. The larger birds with yellow feet are little egrets, the smaller ones with yellow crests and bills are cattle egrets. 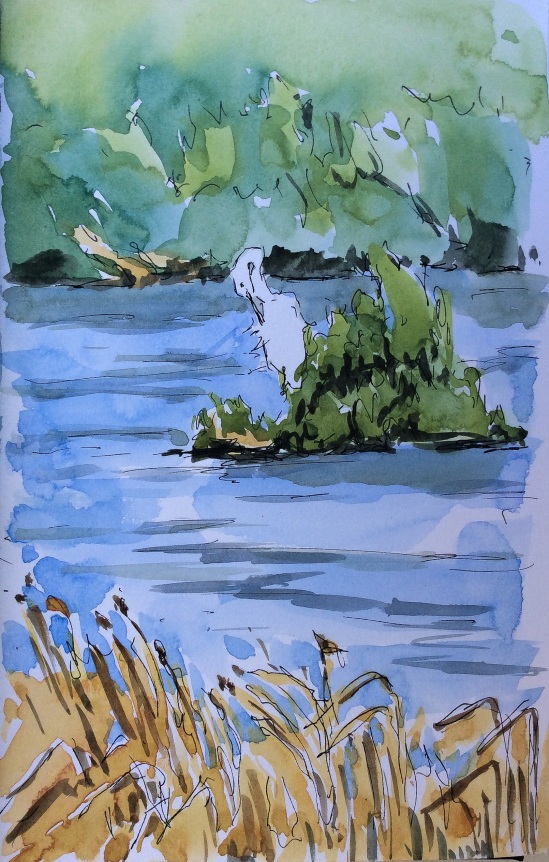 By the time I got round to drawing these birds, I felt I had loosened up a bit.  I scribbled only a few lines on the paper, just enough to hold the image so I could go back and throw on a minimum of watercolour washes a few minutes later. The pen and washes work well on the fairly smooth Stillman and Birns watercolour paper.  My aim was to work quickly without overworking the picture. 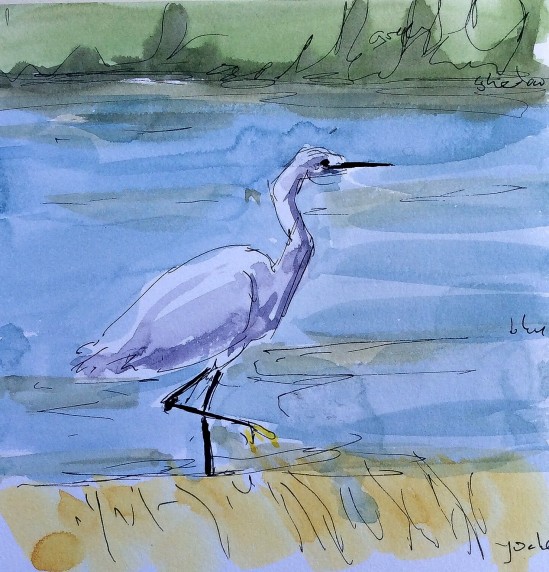 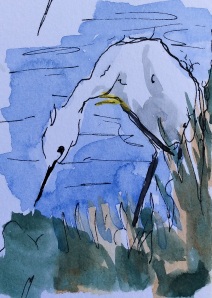 I also spotted a line of about 25 elegant waders, black-winged stilts with long red legs and delicate probing bills.

In loading these drawings, I came across pictures of cattle egrets accompanying horses against a background of tall reeds, drawn while on another cycle ride in Mallorca two years ago with quite different technique. 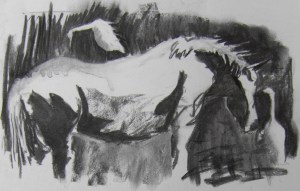 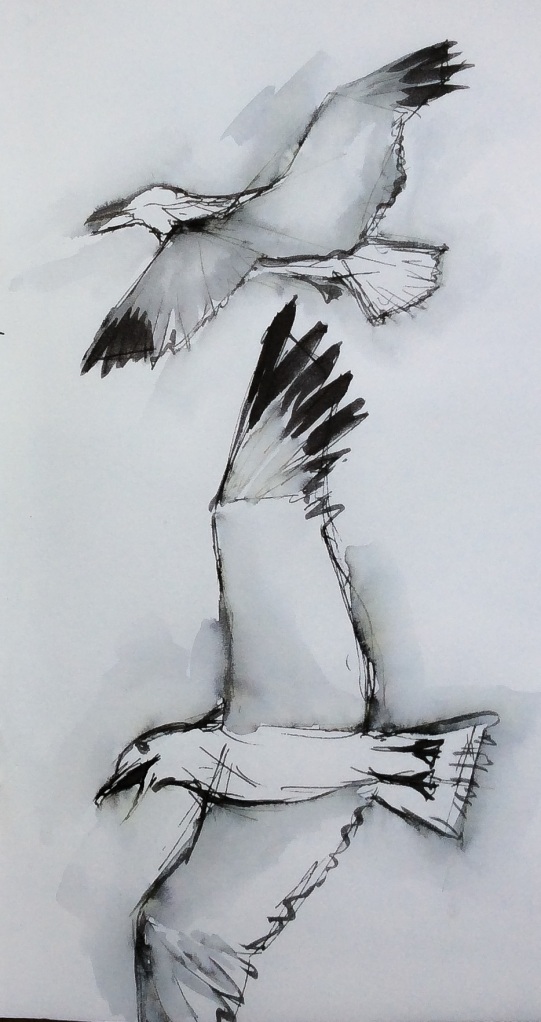 These drawings were made in ink, with water to create the tones, in an A5 sketchpad.

I stood on a narrow spit of grass-covered rock with steep drops on either side.  Kittiwakes wheeled above me, at eye level and far below.  Much of the time the birds flew so close that I could draw directly without binoculars.

Many birds were returning to their nests and partners, with ululating greetings by both parties.

Others seemed to be riding the rollercoaster of the air, mostly gliding, with only a few downbeats of the outer parts of the wings.

They circled fast, away from the cliff.  Then turning in, they descended, dropping their legs and splaying their toes to use as airbrakes as, perilously, they neared the rock face. There, rising air gave them lift. Gaining height but slowing, they turned and accelerated, soaring out to repeat the manoeuvre. 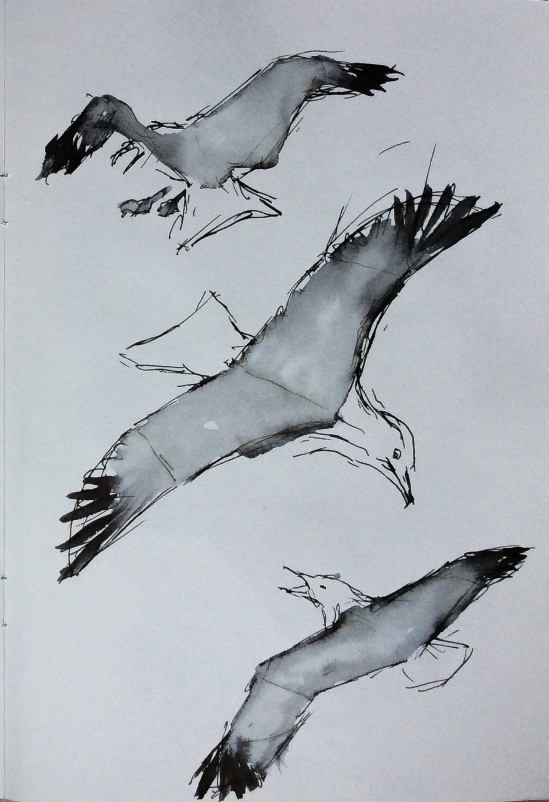 I had to watch and watch again, trying to fix their shapes in my mind.  It seemed that the white body and head was suspended beneath the rigid plane of the wing, reminiscent of a hang glider or a Cessna light aircraft.

I found I was drawing rhomboids, one for the inner wing, made up of the arm and secondary flight feathers, and another for the outer surface made of the fingers and primary feathers.  These moved and changed shapes in relation to each other through the cycle of soaring, wheeling and braking.

And always there was the noise of the onomatopoeic kittiwakes. 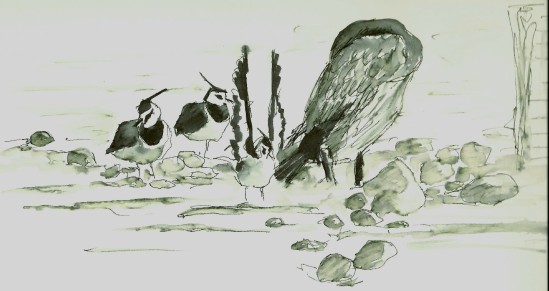 Left eye on the scope, right on the paper, working left to right on the page with a continuous line, taking in the pebbles forming the bar rising above the water along with the birds resting on it, later washing in tones and blocking in the blacks, writing this post listening to Bowie A Reality Tour Life on Mars …

I am writing an application for a grant.  It is for quite a lot of public money, less than a banker’s bonus but enough to employ several people for a while.  This takes a lot of time.  I am not drawing nor painting.  Sometimes I practice the 4 chords I know on the ukulele and almost get them right.

To make room for others, I took down a lot of old watercolours from our walls and dumped them in a cupboard.  These are from a couple of years ago.

Sitting at the computer, I imagine I am looking out on an estuary, the wide mud flats met by the sky stretching down, hearing the thin piping of the wading birds, seeing the artefacts of humanity so small …

Last weekend I was back at Birmingham Printmakers, cheerfully learning the techniques of suicidal linocutting from Jacqui Dodds and Christine Bradshaw.

I had done a tonal drawing sitting on the cliff top at St Abbs in June.  I had had the idea from the start about using this as the template for a print.  I wanted to use the blue as the mid tone for both the darks of the birds’ uppers and the shadows of the white underparts.

I mixed a light blue ink for the first cut.  On reflection, I think I should have cut more white into the foreground and allowed the background to recede in the mid-ground blue.

For the second cut, I mixed a reddish brown which darkened when overlaid onto the blue.

When the third layer in black went on, it was like magic, suddenly pulling the whole piece together.

I’ll add a plug for my hosts.  The Birmingham Printmakers are celebrating 30 years of existence with an exhibition in the Birmingham Museum and Art Gallery.   It’s very good though I was dragged around rather rapidly by my impatient children.

Thanks Jacqui and Christine.  I’m looking forward to joining BPM and doing more of this. 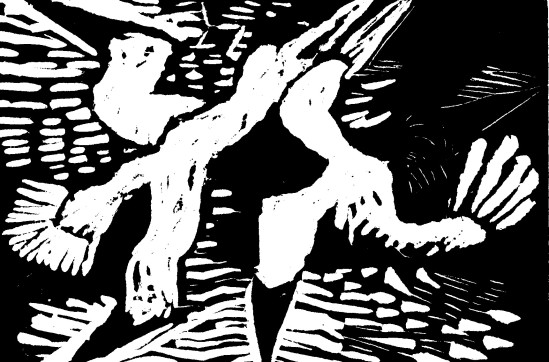 Fast and clumsy would describe this. I couldn’t at first find a fine gouge to take out clean lines to show the beaks. The cuts on the tail on the right would have worked better the other way round. Amazingly, the stark contrast of black and white still drives a striking image for all its defects, showing the power of this technique. Practice and more time and care will help this.

I had another shot at this, trying to abstract from the sketch, putting in a first layer of colour and cutting more finely. Even so, ink filled my gouges and obscured the beak on the left (there was not time to clean this out and make a further print).

These next half dozen posts show small sketches in an Arches Carnet de Voyage pad from the nearby woods and flooded quarry works made in March, May and July. In the middle of this sequence comes some discussion on mixing greens based on advice given to me during the Seabird Painting Course.

For three days running I perched on the narrow ridges atop steep spurs of rock running out from St Abbs Head into the sea.  The cliffs below and facing me and the tops of isolated stacks were carpeted with nesting birds.  The upper airs were torn by kittiwakes looping in and up to their mates.  Below, the stubby auks, guillemots and razorbills, with fast wings, flew in and out from sea surface to cliff face.  There was constant, compelling noise, the rising and falling crescendo of the guillemots’ harsh croak, the kittewake’s onomatopoeic greetings as they returned to the nest and the threatening cackling of the sweeping watchful herring gulls.

This was my opening sketch, in pencil on cartridge paper.  I was seated awkwardly looking along the side of a rocky spur, close enough the draw partly by eye, partly using the telescope.

My previous post was painted the evening before the start of the five-day Seabird Painting Course.  This next piece marks its end, painted from the English side of the border looking across the River Tweed to a Scottish woodland, the morning I set off for home. 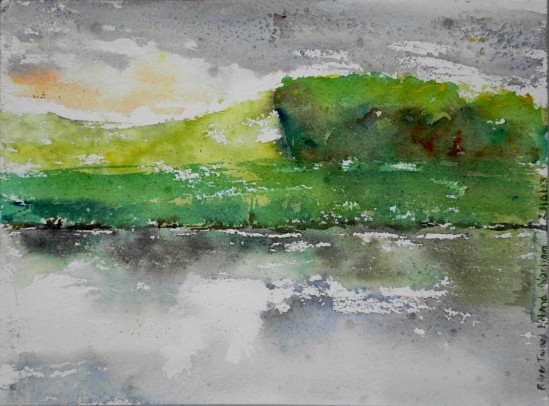 No masterpiece I know, but it combines much that makes painting pleasurable for me.  It is loose and a little abstracted.  It was painted directly in under ten minutes, against the elements, with me standing only part sheltered from rain beneath a tree.  The falling water kept the paper damp and moved the pigments: the trick was to stop before all turned to mud.  Later, when the paper had dried, I placed a single additional layer of paint to strengthen the grass and woodland and the mud water margin.

The Seabird Painting Course is a long-running annual event, founded and led by the great wildlife artist, John Busby.  I had been once before but still, this year, found it an remarkably challenging.  There is fabulous guidance and support, not just from the four tutors but from the twenty or so other students, an accomplished and diverse group.  However, the settings remain overwhelming – I could never decide whether to obsess over anatomical minutiae, capture movement and drama or paint the big picture.

In the next series of posts I will set out my sketches with my reflections. Though this blog is open to public consumption, this is primarily for my own benefit – to consolidate something of what I have learned.

In my notebook I have jotted the following thoughts to explore: