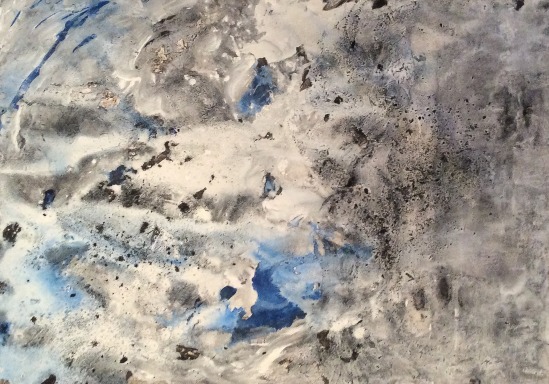 I re-suspended the loose charcoal in the picture posted previously in very wet white gouache.  White and Prussian blue acrylic were applied in selected areas. The white acrylic pushed the gouache wash away whereas the blue slowly bled into it.  The migrating washes (below) were left to dry overnight and then the whole layer fixed (above).

The music was by Elena Kats-Chernin, the haunting Works for Piano Trio.

I am thinking how to draw back into this.

In the experimental drawing workshops, we worked on two pieces in parallel.  The first started as straight non-overlapping lines in charcoal and was posted as “Wildcode“.  The second was built from curved lines, always reserving an area of paper free of carbon stains.  This was then stored on a rack.  When I looked at it a week later, it had acquired an imprint of a piece of metal that was more interesting than the original drawing.  I built on that in charcoal layers, then throwing white gouache at it.  This is fixed and photographed.  I have cropped and tinted the image using Artrage on the iPad.

At the end of each school year, home comes a big folder of of all the lovely paintings my kids have done, week by week. We do a bit of slapping paint around at home too.   Some go on the wall.  Quietly, quite a lot go in the paper recycling.  When in the experimental drawing workshops, I often wonder what distinguishes us from small children playing with paint.  I sort of think, not a lot.

We seem to have been playing with monoprints: layering pigment on metal plates and pressing paper on this by hand.  The output from the group is very varied.  My own approach was at first to use quite dilute gouache, and some ground charcoal and chalk pastels. 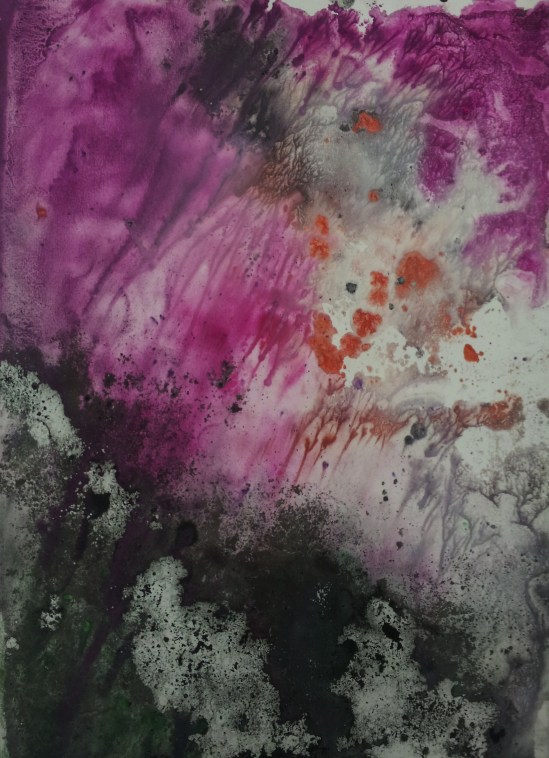 I wondered what then to do.  I had made nine monoprints in rapid succession.  I could look at the pretty patterns and say – “finished”.  But a few purposeless patterns are not art any more than just looking at mountains or rivers or the appearence of stained tissue on a microscope slide are art.   Eventually, this is the stuff of the recycling bin.  Unless I use it.  Somehow. 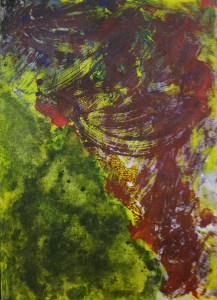 I started to go over these first patterns first in charcoal (not sure about that) and then I explored printing again, using thickly brushed acrylic.  This is still experimentation.  but I begin to have an idea.  I am thinking of printing more sparingly over these patterns, building layers with rose and viridan to re–create an image of a heron on look out that I have previously attempted in watercolour (with very limited success).  A version I’ve not posted before is below and I’ve linked to the previous attempts also. 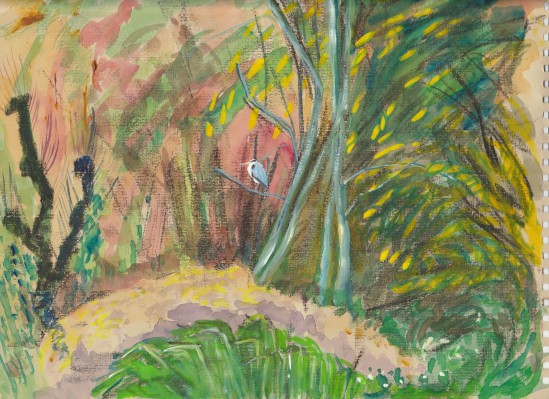 He hath shewed strength with his arm; he hath scattered the proud in the imagination of their hearts. He hath put down the mighty from their seats, and exalted them of low degree. He hath filled the hungry with good things, and the rich he hath sent empty away.

Nadezhda Tolokonnikova, Maria Alekhina and Ekaterina Samutsevich protested publicly against Putin’s third term presidential candidacy and specifically against the open support of the Russian Orthodox Patriarch for Putin. They were arrested in March 2012 and today, after a laughable trial, were found guilty of “hooliganism”. They have been sentenced to two years imprisonment.

A day later, I added the link to a thoughtful commentary in the Guardian. Interestingly, my post is a tiny ripple in a big splash, intelligently orchestrated by a very professional art collective. The powerful church and state in Russia have held themselves up to ridicule in their crass and vindictive reaction. Does sharing and disseminating this art shine a light on the abuse of power everywhere?

How might it feel in my home town if we walked under constant surveillance from a kilometre in the sky?

If those remote eyes guided missiles?

If any male over 18 years were defined as a legitimate target?

If any gathering of more than three people were viewed as terrorist activity?

How might we live our lives, buy and sell, celebrate and mourn, work and learn, protest and be free in fear of sudden, targeted, guided but blindly lethal attack?

How much or little might our society have to change for this to be thinkable?

The final one in the series:

Drawn from memory, sketches and photograph on my phone.

St Abbs Head is a majestic torn and contorted precipice colonised by kittiwakes, guillemots and razorbills among others. I was somewhat overawed, perched myself looking down onto the cliffs with birds soaring out to sea and returning to their nests. I attempted a technique I’d used before but never outdoors: layers of charcoal, gouache and pastel, seeking textures and colours emerging from greys. 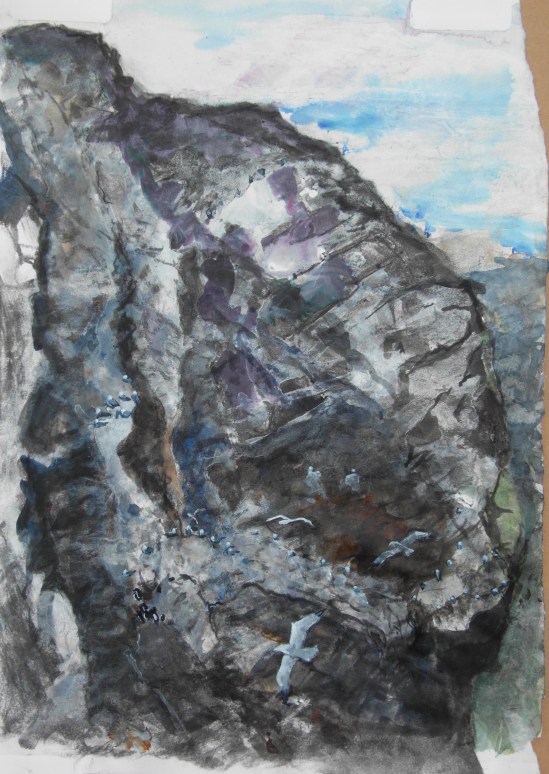 This approach works by building layer after layer, allowing these to dry over days, permitting time to look and think. As an open air sketch, it risks being crude and overworked, making texture for its own sake.

That same day we were scheduled to take the boat to Fidra to draw the nesting birds there. The first landing party had left and we stood on the quay waiting for the boat to return for us. It seemed a long time. Here’s a page from my pocket book of Fidra through the telescope.

Actually, the boat had grounded, wrecking its steering gear. Our colleagues who had landed had to be rescued by the RNLI lifeboat. That’s why we ended up at St Abb’s Head for the remainder of the day.

Interestingly, it is claimed that Fidra was the geographic inspiration for Stevenson’s Treasure Island. I have previously illustrated a scene from that book: a high basaltic plug stands proud behind a marsh from which birds rise in alarm at the sounds of foul murder. I’d used the layered charcoal and gouache and ink approach step wise over some weeks. 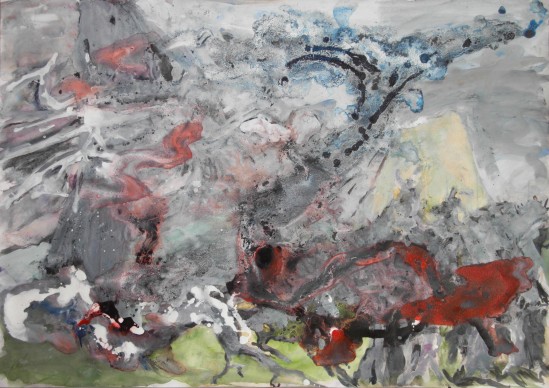 waking in Chicago yesterday, first thing was to buy an umbrella
its been sunny since

by the way – I’ve updated this image by photographing it in daylight rather than lamplight.  It makes a big difference I think.

oil pastel and charcoal resist, gouache and lots of water

this is how it started … 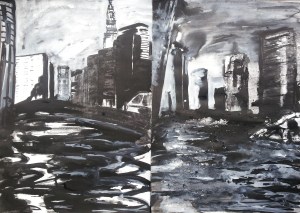 how to rebuild this?

I arrived in the class last week with the sounds and images from the London Underground imprinted on my brain.  Straight away, I tried to depict these is charcoal and paint, as shown in my previous post.

However, this meant that I neglected the works begun the previous week (https://kestrelart.wordpress.com/2012/05/11/chicago/).  In the last half hour, I was encouraged to go back to these and work in a new layer.  Painting upside down (the picture, not me) I picked out and strengthened pre existing textures and tones.  I tried to maintain a balance between abstract and illustration.  Here is that next version, still drying. 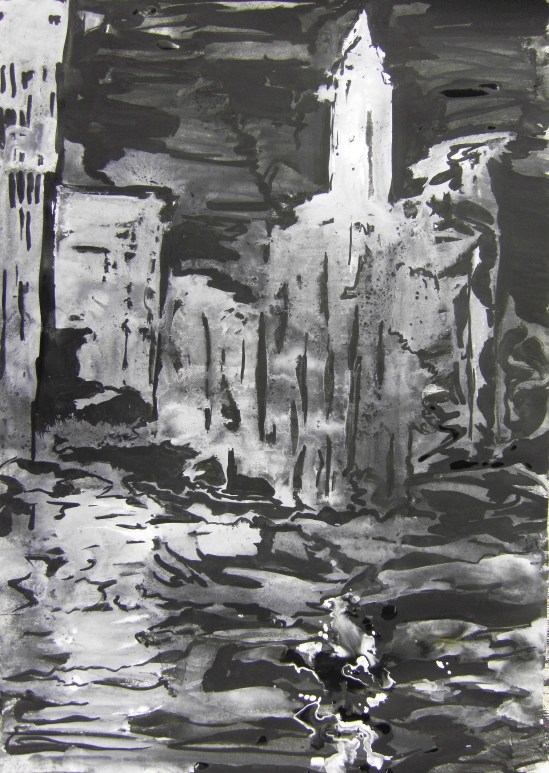 The reference point for all these recent works has been a book of the work of John Virtue.  This British artist works only in black and white, eschewing even greys, building land and cityscapes in which recognisable features emerge from smoky abstraction.  Google images have a great selection to peruse.  I found a page in an academic blog which sets a landscape by Virtue in the context of his contemporaries: http://paintingowu.wordpress.com/2011/08/30/some-contemporary-landscape-paintings/

There is much more to develop on this theme.