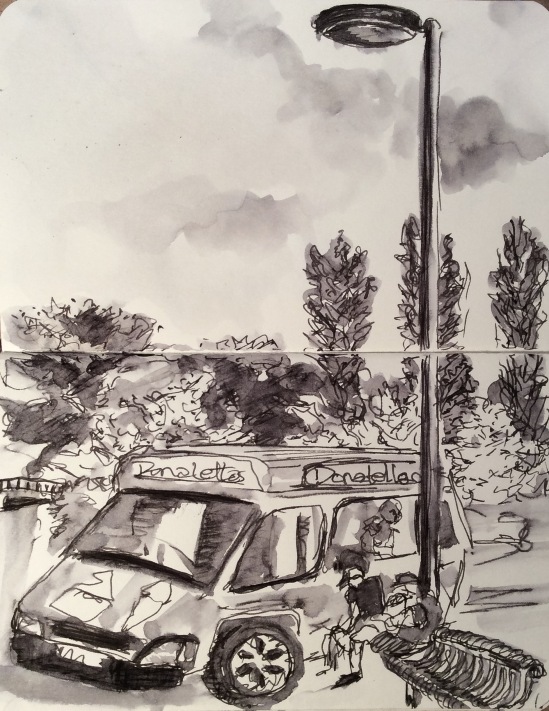 A recent workshop focussed simply on using different marks to build various surfaces … and absences as light refracts through open air.  However, I have reverted to type making the same marks in fountain pen and bleeding them with water. The only change I have made is to lift ink from the nib with the brush and mottle the paper in places without hard lines.  I have tried to show the hard metal of the lamp post with straight lines and to build contrast between  the reflecting glass and matt body work of the ice cream van.  I think I need to look more closely at how other artists have used line and dot to create texture, tone and contrast.

Here are a bunch of sketches of and by the family.  They all seem to focus on feeding or waiting for food I notice.  My drawings are recognisable enough – the same fountain pen marks, the same water brush.  But if you look closely, I managed a bit of texture on the ice cream cone!

My daughter has used the same pen but produced wholly different marks.

My wife has used pencil and watercolour pencils, and has an unfussy direct style which captures much of my son’s character (he is drawn waiting for a bacon sandwich sitting outside a café).

Birmingham Central Library has been rehoused and the old concrete building is being demolished.  The machine sprayed the structure with water while clawing at it.

At the beginning of May, during an outing for my son’s birthday, I stood in a vantage point and drew this in fountain pen and conte crayon while waiting for my family to catch up with me.

These oddments are the remainder of December’s sketches.

Several were done on the train with my daughter as we went Christmas shopping – one of these pictures is of me but not by me, the others are by me but not of her!

I have tried to risk my own embarrassment and just get on with drawing people I see.  People do notice and look a little askance.  I wonder if someone will become irritated.  I try to be covert in my drawing – perhaps this is the problem.

A thirty second view from the train window. 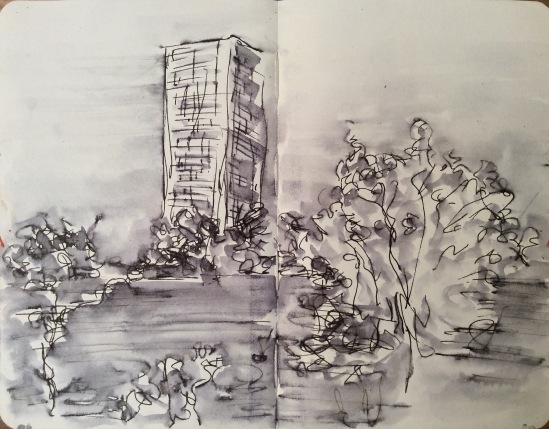 Two drawings came from another train journey with my son.  We play a game – one of use draws a random line, the other completes this to a picture.  These two pictures, one mine, one his, took on a kind of Star Wars theme. 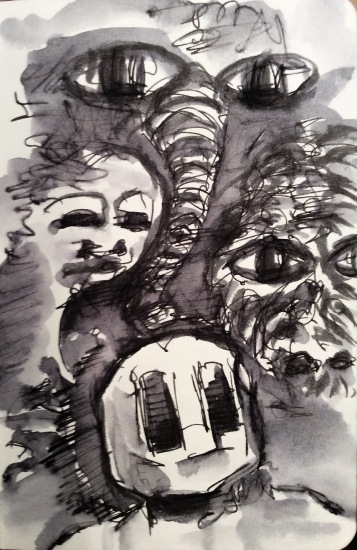 These next few were done in Singapore.  The first is again of the ludicrous Marina Sands hotel.  This time I was standing on a bridge linking giant artificial trees (one shown in the sketch) that disguise the exhaust vents for the power units for the Garden in the Bay.

This was the ten minute line drawing of the Sultan’s Mosque.  This was the sketch I had to abandon as I had to get back to catch a plane.

This was my one attempt to draw, sitting at a café table in humid heat, looking up at the old decorated buildings in Chinatown.

These people were sitting waiting for our plane to board at Singapore airport.  Both sketches began with pencil construction which I later erased. 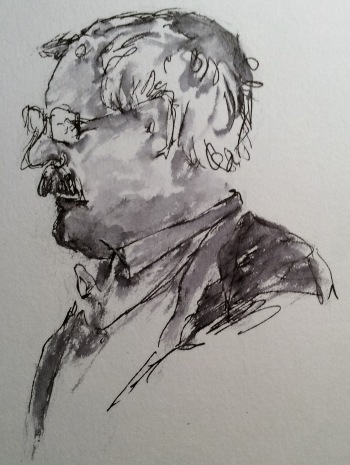 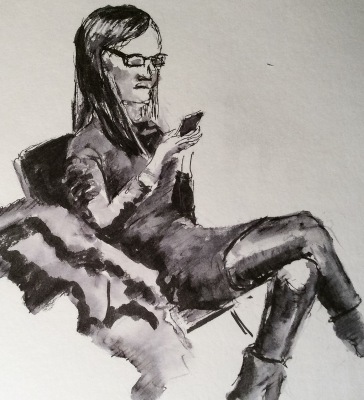 And lastly, my son, today, muffled against the cold, sitting outside the pub waiting for his burger.

Today my daughter asked to go for a walk and do some drawing.  This is not something we do often.  She had in mind a muddy walk through fields to a place where we had previously drawn buzzards.  So we did.

She chose a composition looking out into a field where an old almost bare oak tree was crowned by reddening foliage, glowing in the late afternoon autumn light.  She drew bold lines in pencil then switched from that to watercolour and then conte crayon, constrained by my art field kit and guided by the technique I am developing for myself.  I looked only twice – when she finished the pencil marks and when she had finished.   I will be honest, I really like this piece.

Here is my piece.  However, unlike my companion, I reworked this when I got home.  I had looked again at her painting and at a shot taken on my phone.  I had not seen what she had, that the bare tree still had leaves at the top and side, and these should be the focus of the sketch.  I also needed to bring the foreground forward.  Here is the drawing as completed in the field and photographed in sunlight. 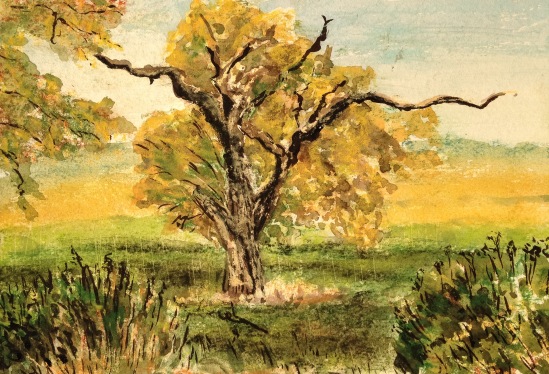 The light across the cut maize stalks was striking. 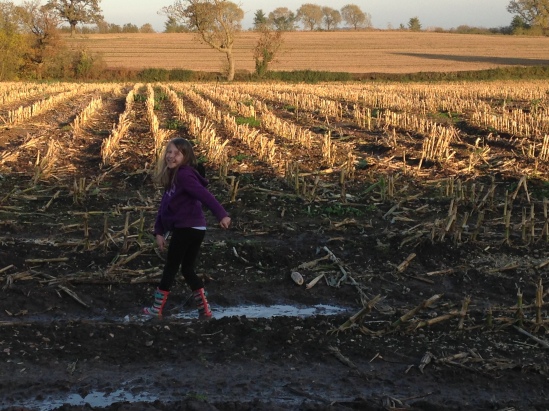 Yesterday, we went by train to the music shop to sort an annoying buzz affecting the C string on my tenor ukulele.  We sketched on the train.

My son states that not one of my attempts to draw him actually look like him.  He thinks I should simply draw cartoon sloths because they have a similar hair style to him, and seem to be always smiling, like him.

It seems a harsh criticism because he does not stay still long enough to allow me to draw.  Here, he is attempting to control a column of air wound round in a brass tube such that there is an interval between the emerging tones and a gap between the notes.  This challenge  keeps him in the same spot and doing the same thing for a few minutes.

My oldest son sent these youngest a book of ideas for building from Lego.  They dragged the crate of accumulated pieces into the living room and I realised I had five minutes to draw while they constructed.

Even then, it is remarkable how lively they were, gyrating through different positions on the floor while preoccupied with their task.  Quickly this descended into a chase across the furniture as their constructs were caught up in a narrative.

In the picture below, he has perched on the stairs to read the Lego book.  I draw from under the table tennis table in the hall.  Perhaps the odd angle explains why I gave him puny forelimbs like a Tyrannosaurus. 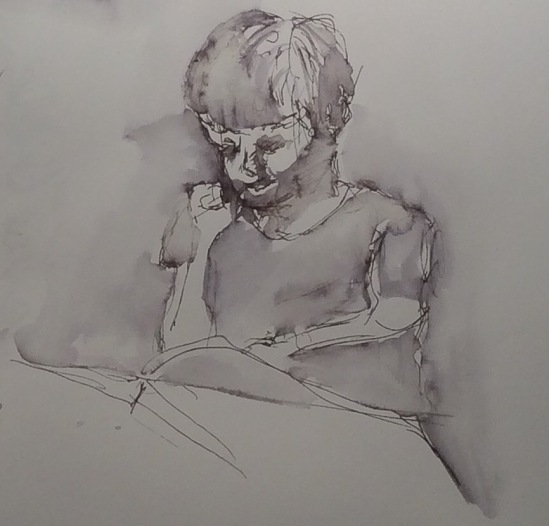 The play park in the cold is an inauspicious setting to draw.  Here, he perched for a minute on a high log.  There is something missing from this sketch … I think it is half his leg.

One trick is to do a deal.  I drew her in return for her drawing me.

She needs to talk about a talent in class next week.  Her original plan was to play the ukulele.  I was a bit sceptical: initial enthusiasm a year ago quickly faded when pressing the strings hurt her fingers.  She thinks I could teach her enough in the next 5 days.  Her faith in me is touching but misplaced. My playing is limited to messing around, mostly in a G minor harmonic scale with a drone on the low G hit by my thumb, fantasising I am Ravi Shankar.

She has a better chance with drawing.  Given a spare moment she draws.  So I gave her a pad with decent cartridge paper and a 4B pencil.  She was willing to listen to my explaining about 3D shapes and shadows because she has five days before presenting this talent, which is pressing a little on her mind.  If she allows, I will post her drawings soon.

Today, we did an experiment.  Could a sloth lie on its back in the water with all four paws vertically upright allowing a sail to be hoisted?  We think the answer is no.  We sank.

I went out to draw herons today.  In packing my bag, I found this sketch I did in the spring when the weather started to get warm and the children began playing out again on the climbing frame.

I had managed a quick sketch of my daughter as she held the bar suspended from a rope and spun round fast.  Once she spotted me drawing she became self conscious (or dizzy?) and stopped twizzling. 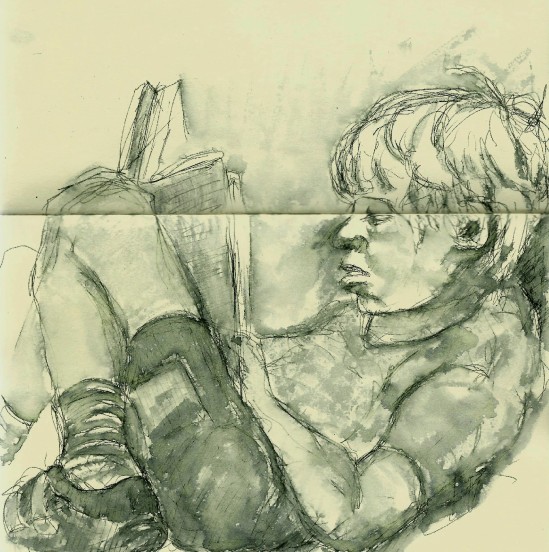 My son has a delicacy and charm to his features that I wholly fail to represent here.

Like all growing children, his head is completely out of proportion – a great big bonce surmounts an undersized face, large eyes but a jaw too small for his tombstone gnashers.  I typically miss this and make him look too grown up with coarse features.

What I did like about this sketch was that it shows him folded up, typical of him when he is reading.  That is true to life.

If he spots me drawing him, he pulls faces.

If I could capture his expressions as he attempts to sabotage my drawing I would be happy indeed.

I will keep trying. 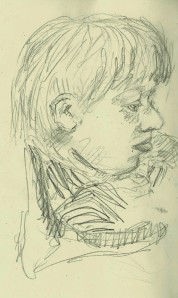 The last sketch was done in a brief minute as he stood in the nest half way up the climbing apparatus in the park. 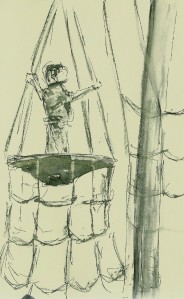 She is reading Maisie Hitchins and the item behind her head is a soft toy rabbit called Coco.

Mostly I use a Derwent book containing cartridge paper. Above are some of my first sketches after I bought my Lamy safari fountain pen and brushpen.  This is the combination I have been using for all my recent bird drawings in the field, except that now I also use a water wash to loosen the lines.

Today, I sketched the same subject, my son, while he squinted into the sun and addressed a bacon sandwich after we had been cycling.  It is an unflattering sketch and inaccurate – I have got the proportions wrong and so he looks way too old.  in my defence, he most certainly did not model for me, but chomped and looked around while I drew fast.

Still, the point is that this sketch was done in the Moleskine notebook.  The water wash does move the ink but the paper underneath serves as a resist. I like the way it dries after beading.  This makes for a dynamic texture.  Its just a question now of my learning to use it right.

It came as a sudden insight that drawing people is skill to be learned and developed.  It is not magic … miracle or mystery.  Until now my sketches of our own species have been haphazard at best.  On holiday I have been studying a more structured approach. I have thought more about the anatomical structures under the skin and looked harder for how these affect the shadows and reflected light.

By and large, my models were my children.  They are fairly tolerant but they do wriggle a lot.  These first two of my daughter have all the right elements, eyes, nose, hair etc, but … they do not exactly look like the real person. 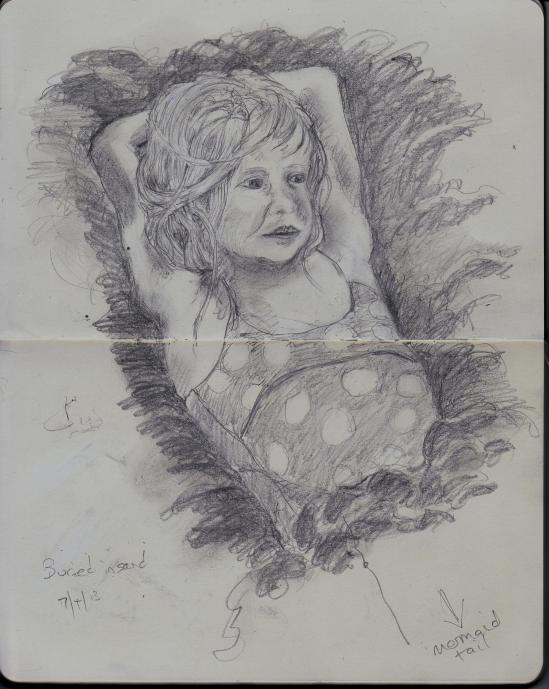 The lines on the top of the second sketch are of my son.  Here are more.  I have been accused of making him look like an ogre in the first sketch as he contorted his features squinting in the sun.  He was folding himself up in a chair here. 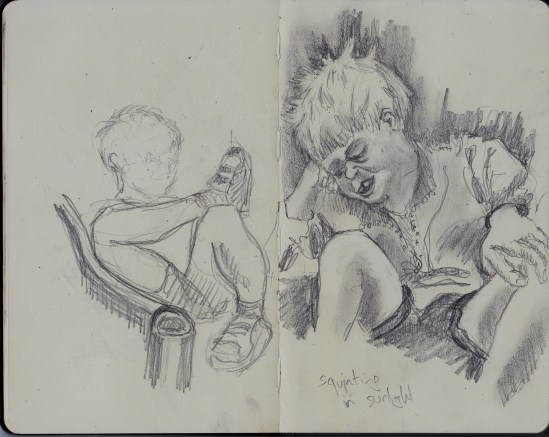 Here are more beach pictures, including my daughter on the right.

Lastly, I started drawing a mundane view of the boulevard and sea behind but became captivated by the lady patiently awaiting custom, usually pre-teen girls who can persuade their parents to pay for them to have their hair painfully braided and beaded.

I wonder where these women have come from and how they are living while we are on holiday.  I have seen similar enterprises around the Mediterranean and Canary Islands suggesting that this must surely be something like a direct selling franchise.  How much of the money are they are able to keep?  Is this a sustainable business model for them or, instead, is it they who are they the customers for a central trader  selling beads, boards and passage to tourist destinations?