Three sketches in conte crayon on black paper started outside and finished at home, stimulated by the recent life drawings of Rosie Scribblah. 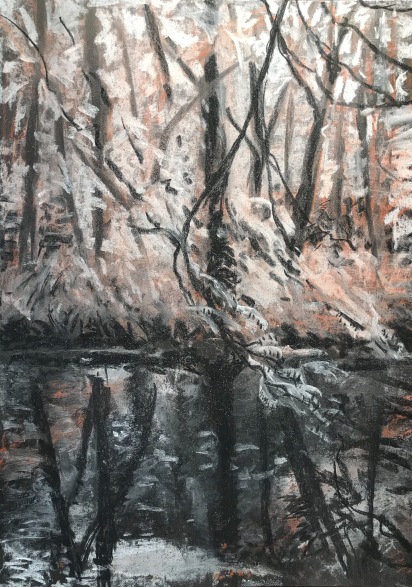 Here are the original sketches, the first from my bike on the footbridge over the ford by the watermill, the other two on foot while my dog sat patiently by. 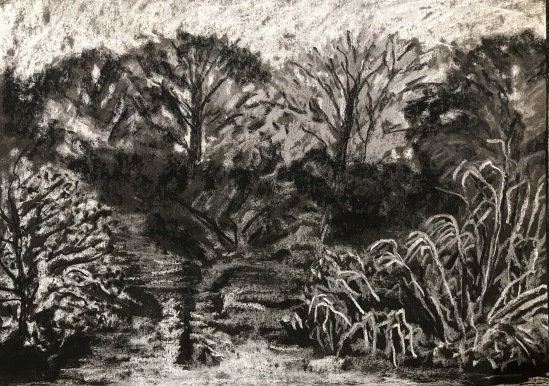 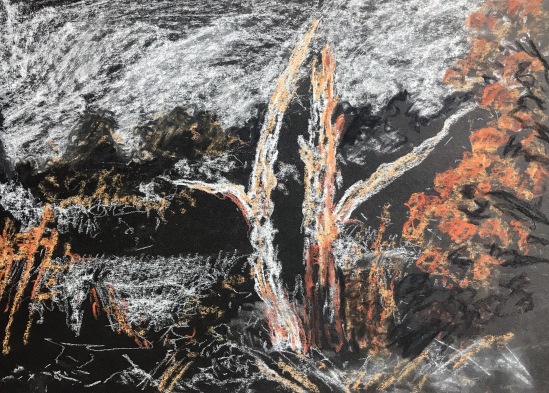 These drawings are a small respite, but with a pandemic uncontrolled by active choice of those with power, democracy devalued and the world moving to the tipping point for massive climate change, there seems small comfort in art. We are on the brink of knowing whether democracy can have a small win against careless self-serving misgovernment, a little step towards the next struggle, or whether the full force of devastation and destruction is to be unleashed on us at this time.

A couple of weeks ago I joined a zoom meeting of Scientists for Labour a group affiliated to the Labour Party.  The speaker was physicist and veteran science policy adviser Sir David King.  He served Labour and Conservative governments.  Under the Blair government he ran a large foresight programme for major events such as a pandemic.  He now chairs the Independent SAGE, which appears to comprise the experts one might have expected a government to have consulted in managing a pandemic.  The meeting is publicly available.  While he talked I tried to sketch (not very well) and made a few notes.

Here he talks about the fact that the UK had been a world leader in preparedness for such a pandemic, setting out how to manage such an event in 2006. 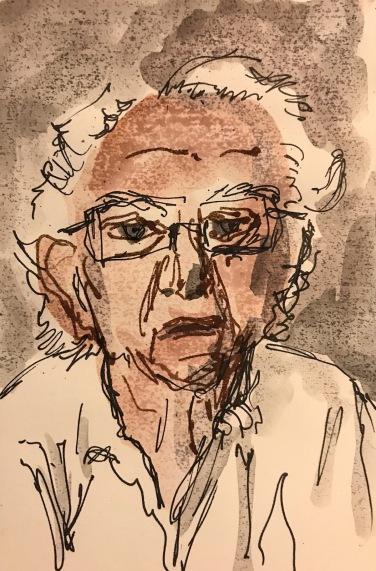 “the biggest foresight program I ran  was on the infectious diseases … our report … said that it was highly likely that a pandemic of the kind that has just occurred would occur … it might emerge from a wild animal … it would spread around the world very rapidly … within 3 months … it would have a genetic make up that we would have no defences against … we set out what should be done, the WHO was represented on the group … and it is kind of surprising and amazingly annoying that the country that produced this report … and the WHO responded very well … that we are the country that sits behind every country in terms of our operation.  Sixty five thousand excess deaths to date …” 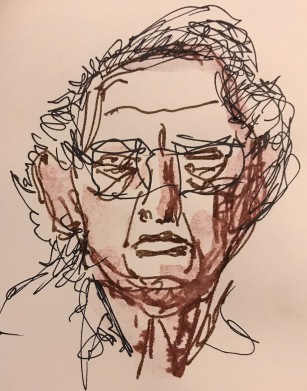 “it is difficult to believe a word of what the government is saying”. 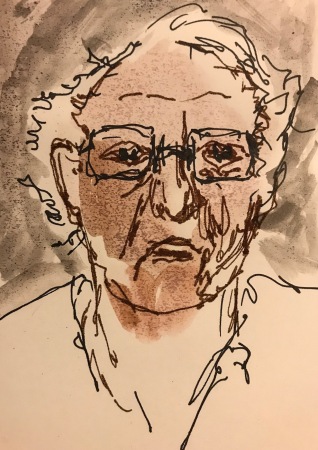 “complete mishandling of this pandemic of appalling proportions”. 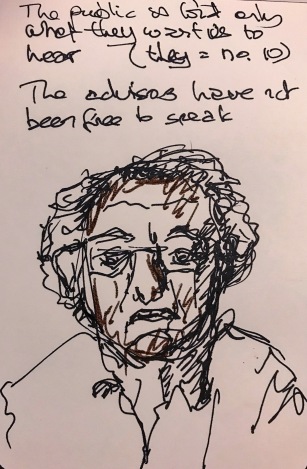 “A vast number of people have died unnecessarily …”

No prizes for guessing the source of the idea behind this doodle.  This was overlaid onto the background shown below used in a previous post. 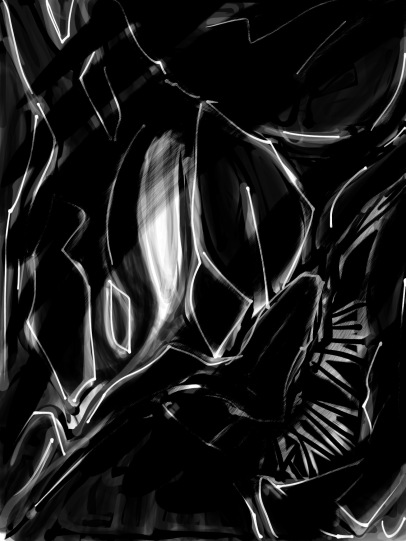 I have been listening to Alien: Out of the Shadows, an audio adaptation of a novel, itself written from a script of a film sequel never made.  We start 40 years from the destruction of the Nostromo with Ripley teamed with the surviving crew of a mining vessel, again facing the devastating egg-laying hive monsters.  The on-board computers, and those on the planet-side mining station, are corrupted by the single minded purpose of Ash, the synth humanoid she thought beaten to destruction on discovering its over-riding programming to bring back a viable xenomorph specimen, “all crew expendable”.

Fighting a plague when the governing minds have other purposes: a story for our time perhaps. 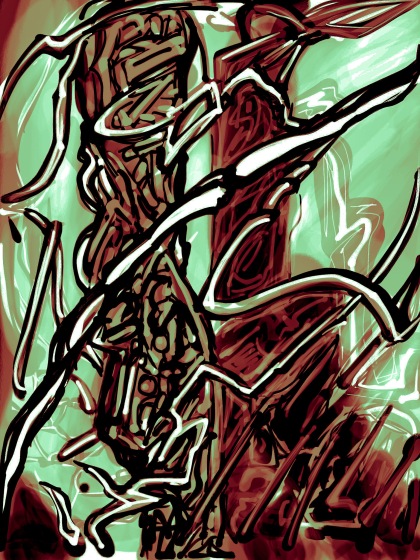 Somewhere in the Balkans the city of Besźel occupies the same topological space as Ul Qoma.  The two cities are separated by culture, religion, language, taking opposite sides in the cold war and and before that between the Allies and Axis. Citizens of one space unsee, unhear, unreact to all protuberances from the other.  You can reach one from the USA, the other has more links to Canada.  Internet and cell phones work on both sides, but to communicate between the cities, that must go long distance through international exchanges, or perhaps not at all.

The air is shared, but aromas from one side are unsmelled on the other. Objects exist strictly in one or the other place, but as they disintegrate to anonymous detritus, they blow with the wind through both cities.  They say it rains more in Besźel.

I cannot tell if this is some quirk of folded space-time that brings together these specific overlapping fragments of parallel universes separated by an historical quantum event, or instead this is an idiosyncrasy of two populations in a single conurbation reinforced by intense taboos and policed by the feared invisible omniscient Breach.

This is The City and the City by China Mieville which I have listened to as an audiobook.

While listening to this book, I came across this video “to survive, to live – 2019” through twitter.  The writer who introduced me to it now has a blog.  I thought, this is the city and the city.  People live precariously, and isolation during a pandemic leaves them without resource and invisible.  I thought, we are not asked to judge, just to not unsee.

These drawings appeared taped to my computer screen at the start of my working day, starting from 3 weeks ago.  They are done by Kathy and Karen, who take blood from my patients.

We are now gearing up, ringing all our patients to keep on with their treatments if possible, and preparing ourselves and our families for personal redeployment. 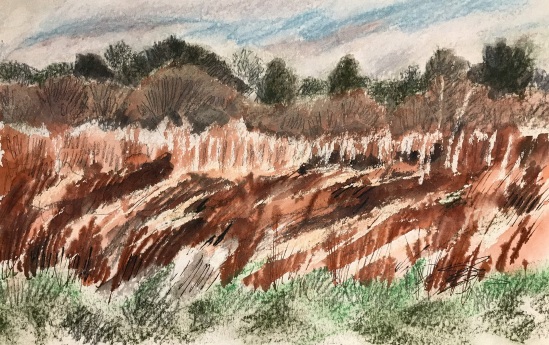 I have done my consultations this week by phone.  But you learn so much from seeing someone’s demeanour, how they rise from a chair and walk across the waiting room.  I have become blind, and must rely on listening more to detect those subtle clues.

The main benefit is people not travelling long distances by public transport or sitting waiting in a crowded room.  Still, someone has to get close to take the blood sample and to give the treatment.

My greatest social distancing pleasure comes from walking the dog across fields, through woods, and along the stream.  He imagines himself the lead explorer, running back now and again to check on me. 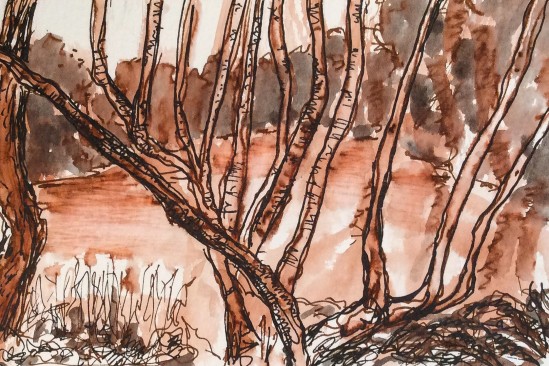 He has taught himself that when I stop to draw, he will sit and wait by me.