I listened to Janacek’s sinfonietta on the radio.  The anchor commented that two different recordings of the same music  provide the soundtrack to Murakami’s novel, 1Q84.  I downloaded the music, and the book.  Janacek’s sinfonietta marks the boundary between the real and unreal, the profane and sacred.

Around the same time, I listened to a learned discussion on the writing of Anton Chekhov.  In 1890, the ill young man made a three month journey from Moscow across Siberia to the penal colony of Sakhalin Island.  After listening, I have begun to work my way through his stories. As it turned out,  Chekhov’s narrative power is another thread running through the tapestry of 1Q84

According to Chekhov, says a character in 1Q84, once a gun appears in a story, it has to be fired.

Mainly because I’m using my work laptop which does not have the distraction of my blog or paintings on it.

I am avoiding distractions while I labour over writing a paper, among other things. I now have marvellous software that allows me to view the most minute detail of photographed sections through tissue specimens, coloured to identify cells by their function. These appear to be works of art in themselves. I cannot post photographs of the sections here but perhaps in time I will base a set of watercolours on the plains and deltas and forests of the micrographic world I have been glimpsed.

Throwing graphite dust at paper and burnishing the surface with charcoal and a soft rubber resulted in a shiny surface broken by lines of powder that I attempted to fix in place. I was thinking about the novel Perdido Street Station (China Meilville) as I drew this. This is classic steam punk fantasy with soaring descriptions of a twisted urban setting for a crew of hybrid warped and strangely sympathetic characters. 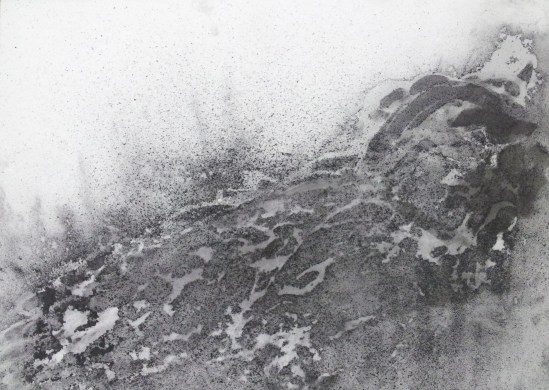 Experimental drawing class has begun again. A big class this time – about ten of us. Twenty or so imaginary sketches in charcoal and graphite made by strangers will, I think, be melded into a larger image and reshaped. Sounds like fun.

These workshops have changed the way I work, making me more open to mixed media and experimentation. I gained the confidence to submit work for exhibition for the first time. This is the piece:

And the exhibition is at the Royal Birmingham Society of Artists.

Just to add – thanks to Kevin Ryan for the experimental drawing workshops at the Midlands Arts Centre.

We must leave these people no place to hide

The government writ no longer runs

The chosen reference for our experimental drawing workshops  is the work of Anselm Kiefer.

His work is carried out on a large scale, constructed thickly with paint, clay, ash, straw, metal, glass and the written word.  The images constitute a dialogue, perhaps more an argument with recent history, art and culture.

Responding to his art challenged me.  Paint combines with solid materials stuck to the surface.  Is this collage or mosaic or painting or a display of found objects?  Are the components iconic or, like individual pigment granules, devoid of individual symbolism?  Other than scale, what distinguishes this art from a child’s picture of glued autumn leaves?

In my first layer, I blocked in a silhouette of my home town in acrylic rose and phthalo green.

Weeks then elapsed.   I returned with toolbox, a hammer, glue, white porcelain plates,  bark, feathers from a predated corpse and tarmac gathered from a surface disrupted by a root.

I suspended the shards and granules in a sea of glue and swept into shapes using a plastic blade.  In my mind, there was a direct link back to this earlier work in charcoal (https://kestrelart.wordpress.com/2012/01/12/swarm/).

Two more weeks have passed since.  Paint and glue has dried.  This week, I spent some time drinking coffee, just looking and thinking.  Then I tried to recreate and expand the obscured cityscape, painting into and over this surface.  I will post that next layer sometime soon.

I have only seen Anselm Kiefer’s paintings as photographs.  I cannot find an example displayed in the UK although the Tate and the National Gallery of Scotland seem to have archived a number of pieces.  I did not know of him earlier in the year when work was exhibited at the White Cube.  My knowledge of him to date is largely gleaned from the internet, including http://en.wikipedia.org/wiki/Anselm_Kiefer

Fine artist Chris Wood comments below and introduced me to the work of Julian Schnabel.  I post the link here so anyone else interested in this theme can follow it.  http://www.julianschnabel.com/category/paintings/plate-paintings

Bridging the gap between breakfast and homework this morning, we folded a piece of purple typing paper to create a book with panels as numbered pages. 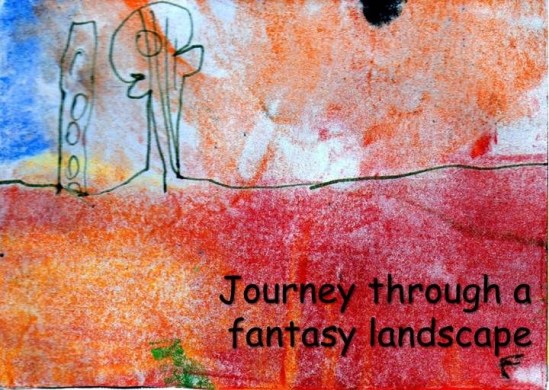 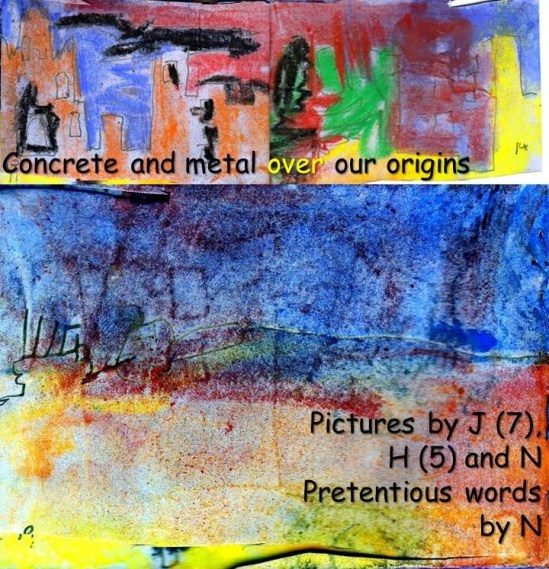 Unfolded, we took turns drawing a continuous line across the panels aiming to create double pages in the book from the discontinuous panels.  We began with a dinosaur theme but the middle pages got hijacked by a fairytale castle and somehow the last ones became cityscapes.  We wanted to colour it quickly and the paper would not take paint, so we used thick chalk pastels, too big for the job.  No finesse here.

I refolded it, sewed the spine and cut the pages .  Here is the sequence of pages, with pretentious words added.

This quick game was based on the method suggested by Greg Poole and described in the last post.

oil pastel and charcoal resist, gouache and lots of water 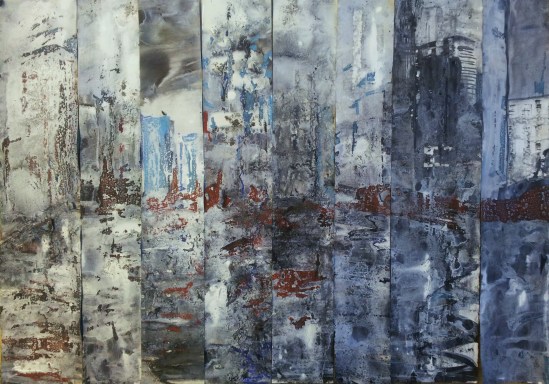 this is how it started …

how to rebuild this?

I arrived in the class last week with the sounds and images from the London Underground imprinted on my brain.  Straight away, I tried to depict these is charcoal and paint, as shown in my previous post.

However, this meant that I neglected the works begun the previous week (https://kestrelart.wordpress.com/2012/05/11/chicago/).  In the last half hour, I was encouraged to go back to these and work in a new layer.  Painting upside down (the picture, not me) I picked out and strengthened pre existing textures and tones.  I tried to maintain a balance between abstract and illustration.  Here is that next version, still drying.

The reference point for all these recent works has been a book of the work of John Virtue.  This British artist works only in black and white, eschewing even greys, building land and cityscapes in which recognisable features emerge from smoky abstraction.  Google images have a great selection to peruse.  I found a page in an academic blog which sets a landscape by Virtue in the context of his contemporaries: http://paintingowu.wordpress.com/2011/08/30/some-contemporary-landscape-paintings/

There is much more to develop on this theme.

Far away out in the marsh there arose, all of a sudden, a sound like a cry of anger, then another on the back of it; and then one horrid, long-drawn scream.  The rocks of the Spy-glass re-echoed it a score of times; the whole troop of marsh-birds rose again, darkening heaven, with a simultaneous whirr; and long after that death yell was still ringing in my brain, silence had re-established its empire, and only the rustle of the re-descending birds and the boom of the distant surges disturbed the languor of the afternoon. 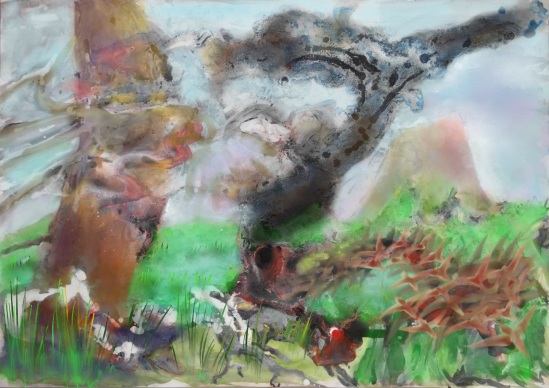 “That?” returned Silver, smiling away, but warier than ever.  “That?  Oh, I reckon that’ll be Alan.”

And at this point Tom flashed out like a hero.  “Alan!  Then rest his soul for a true seaman!  And as for you, John Silver, you’re a mate of mine no more.  You’ve killed Alan, have you?  Kill me too, if you can.  But I defies you.”  And with that, this brave fellow turned his back directly on the cook and set off walking for the beach.

With a cry John whipped the crutch out of his armpit and sent that uncouth missile hurtling through the air.  It struck poor Tom, point foremost, and with stunning violence, right between the shoulders in the middle of his back.  His hands flew up, he gave a sort of gasp, and fell.  He had no time given him to recover.  Silver, agile as a monkey even without leg or crutch, was on top of him next moment and had twice buried his knife up to the hilt in that defenceless body.

From my place of ambush, I could hear him pant aloud as he struck the blows.

You will of course recognise this passage from Robert Louis Stevenson’s book.  I have just finished reading it to my young children.  It has a remarkably high body count for a book for children but for all that remains a classic adventure story.

This painting was first posted a few weeks ago showing how the idea developed.  I had first wanted to show the Spy-glass, a volcanic plug of a mountain sitting proud above a marshy landscape, with trees in the foreground in which our protagonist is concealed.

I then played with this picture, turning it upside down and imposing reflected birds on the iPad.

From this I took the idea of developing the same underlying painting on the iPad into two versions rotated by 180 degrees, each one representing one of the two foul murders in the marsh of Treasure Island.

This is the actual painting after it dried and the various pigments settled.  Having explored it digitally in two directions, perhaps I will leave this as it is.  It makes sense to me visually now, but this has taken time.

Our previous bedtime book also painted a word picture of a marsh.  These settings speak powerfully to me of solitude and wilderness.  However, that fen was an altogether friendlier place.

I have looked and looked at this painting, searching for the direction that will take this to completion.  There is a dark narrative here to be revealed when the painting is done.

On a whim I flipped the painting.  Here is the iPad version, done quickly to explore ideas. 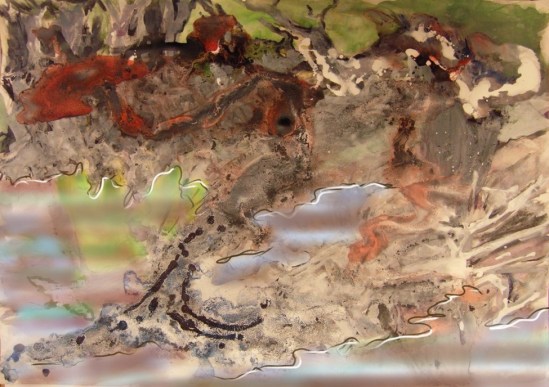