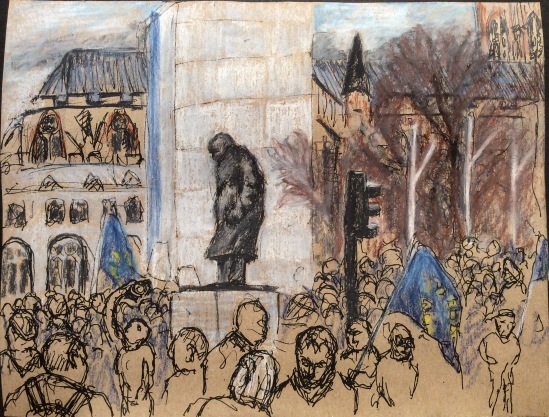 Here is Parliament Square this evening, as people mill about not quite ready to go home after the People’s Vote march.  The statue of Churchill facing into the gale is silhouetted against the white cladding covering part of St Margaret’s Church. 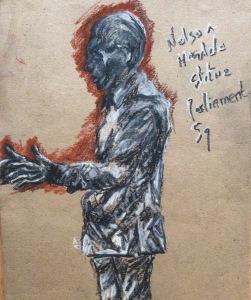 We are in this odd position in which Parliament cannot bring itself to ratify the treaty by which we leave the European Union with a transition period and without immediate chaos.  All arrangements ending our membership are detrimental to the wider economic and political interests of the UK,  so whatever might be the stated opinions of individual Members of Parliament, psychologically and collectively they just cannot bring themselves to commit this act.

The small number of die-hard radicals of the Conservative Party actively want to leave without a treaty, the so-called No Deal, so they and their class can profit financially from the chaos that will impoverish the majority.  The even fewer Northern Irish Democratic Unionists prop up the government and are unrepresentative of the people of that province.  They reject the treaty because it makes transparent the political reality:  after Brexit, Northern Ireland must have a status different to mainland UK if there is to be no return to a hard border with Eire and the sectarian polarisation that would bring.  My party, Labour, reject the treaty not because it is bad (because all routes out of the EU are bad) but because we have three more years of government by a wretched Conservative Party unwilling to seek a consensus vision for Britain after Brexit.  It is a certainty that the Conservatives will cast in law a post-Brexit settlement which undermines workers’ pay, conditions and rights and environmental protections.  They will be free to enter trade deals with other countries to reshape our National Health Service on the USA for-profit model and prevent government limiting the exorbitant prices of pharmaceuticals.  This is the one chance for Labour to bind the government’s hands.  However, strategically they are on the back foot as Theresa May doggedly refuses to compromise, beyond all reason. 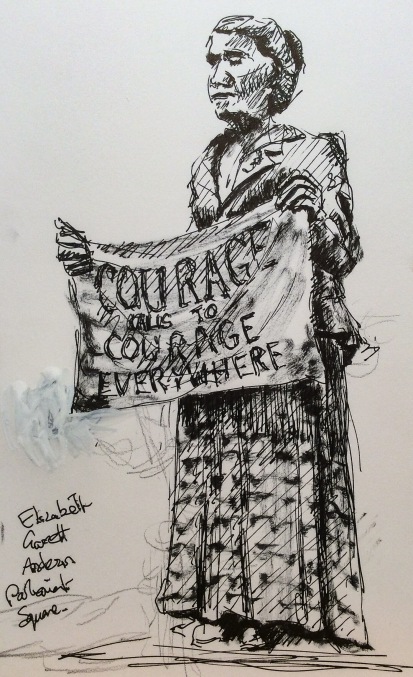 So here I was at the the largest political protest in the UK’s history: a million people united in demanding a second referendum and a chance to reject Brexit this time round or at least a way out the impasse Parliament has created.  Still, even if Brexit were to be overturned, what will we do about the conditions of austerity and inequality which so disaffected people in the first place, and which are frankly so much more important than whether we stay in or leave the European Union?  I begin to realise Brexit is a side show.  In or out of the EU, what we need is political vision which addresses with intelligence and compassion the real issues: planetary destruction, violence and poverty. 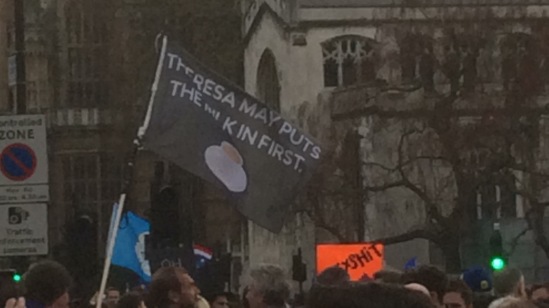 Note the most middle class insult ever on a banner (or is this reverse snobbery?) “Theresa May puts the milk in first” with a picture of a cup of tea.

15 responses to “Bollocks to Brexit”