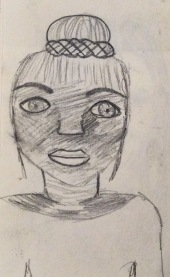 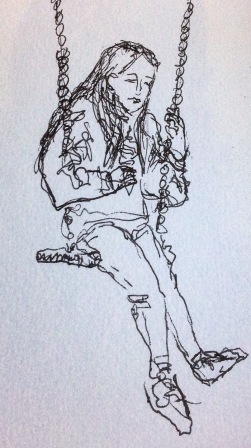 The civil authority presents the person, bound and crowned with thorns, to the crowd.  This is Jacob Epstein’s statue, positioned on the wall of the ruined cathedral.

Twin charred beams that had chanced to fall upon one another were wired together as a cross by a stonemason walking over the rubble: many others were later manufactured of nails from the building, wrecked by bombs and fire in November 1940.

This edifice, the medieval ruins linked to the modernist cathedral, humanity rebuilding from war’s destruction, is a myth in stone, spinning a narrative and tugging at the heart.  A life ago, I learned it is spiritual faith that moves us, and this does not require narrow belief in superstition.  I was moved then by witness, not my own, which sat in the street sharing food with homeless people, crossed into rowdy pubs, found the story in each person’s ended life, stood in comradeship on the picket line and preached liberation at the pulpit. 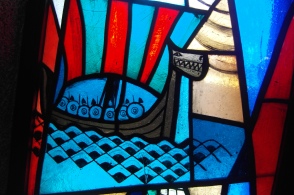 A conversation with Portrait of Wildflowers blogger Steven Schwartzman had turned to the artist John Piper.  Many of his pieces are built of strong black drawn lines, then enriched with colour.  He is an inspiration.  He designed stained glass windows for the new Coventry cathedral.

These are not them.  These were designed by Lawrence Lee.  My daughter had charge of the camera and afterwards I realised we had no more than a glancing shot of Piper’s baptistry, drowned in daylight.

The old cathedral is seen through, and reflected in, the nave’s west window, engraved with figures of the patriarchs, the disciples and saints, with lots of angels.  It’s an boys’ night out with the token girl in the middle. 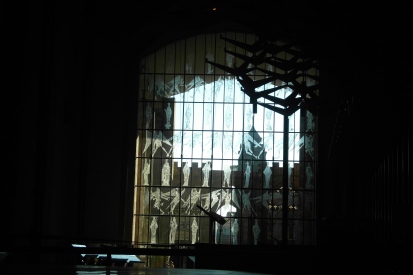 This is another Saturday view of St Paul’s church in the Jewellery Quarter in Birmingham.  The tools here are brushpens delivering waterproof ink, a limited selection of watercolour pencils and a waterbrush. The exercise is to draw sparingly but build texture with pen marks.

The night before we had gone to a Birmingham Jazz gig in the 1000 Trades pub in the Jewellery Quarter.  The singer was Fini Bearman, supported by amazing jazz pianist Tom Cawley and bassist Calum Gourley and the songs were lyrical, syncopated versions of Bowie classics.

I was moved to draw, but also to stop to just watch and listen.

Here are the few sketches I did that evening.

This is another Saturday sketch from St Paul’s Square in Birmingham again using ink marks to build texture and tone without wash or water.  It is clear there is more work needed to use just the varied marks themselves to narrate the scene. 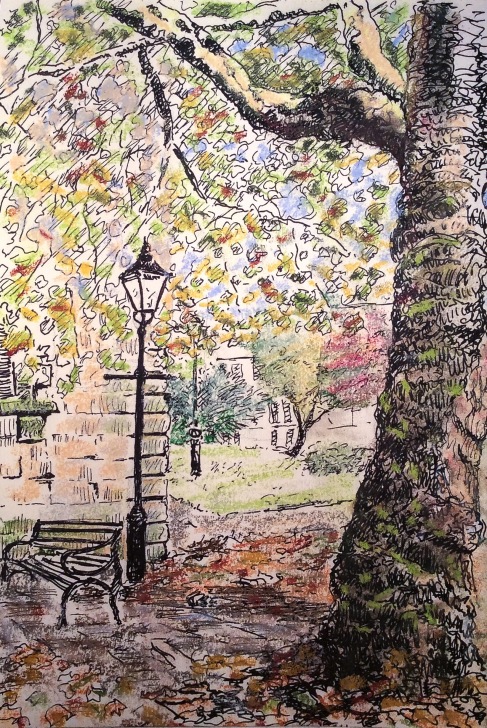 I have switched inks to a permanent black carbon which may permit watercolour over it once dry.  I also want to use less colour, adding a few simple strokes in key areas, not colouring in the whole picture.  Less is more.

This is a sketch of “Raku Angel”, a ceramic sculpture, held together with bolts and nuts, one of Stephen Adams’ steampunk stoneware “Machines of Loving Grace” on display at the Royal Birmingham Society of Artists.

The idea behind the sketch was to focus on building the texture with marks from the pen, without resorting to the waterbrush to flood and smooth the ink.  Afterwards, I drew lightly into it with conte crayon.

Also on display was work by Birmingham Arts Circle inspired by the written word, of which my favourite was Sue Howells’ “Crow” for which she drew on Dylan Thomas’ description at the start of Under Milk Wood “sloeblack, slow, black, crowblack, fishing boat-bobbing sea”.