The Woman in the Moon is a comedy from about 1590, which forms part of a historical repertoire of works to be performed by boys’ companies.  The first woman, Pandora, is created by Nature and gifted with attributes from the heavenly bodies.  The disgruntled planets conspire to control her temperament, each in turn affecting her mood and desires through melancholy, ambition, aggression, romance, lust and deceit until Woman finally finds her natural state in the changeability, verging on madness, induced by the moon.  At the end, Man, as her husband Stesias, is condemned to always follow slavishly in her wake, admonished to never act on his anger in violence.

As such it is an … how can I say this … interesting choice of play for these times, performed and indeed toured by the all-boys school attended by my nephew.  What ever one may think of the play, it was well acted and they are, I am told, to be filmed for the BBC.  I am curious what lessons the boys drew from their participation.  What are we to understand from this contemporary performance?

We arrived late and unable to get seats, watched from a high balcony far back.  This did allow me to draw, albeit small scale and in the dark.  Here are Jupiter, and then my 12-year old nephew, probably the youngest in the cast, as Hermes casting his mercurial influence to induce in Pandora, sly deceits. 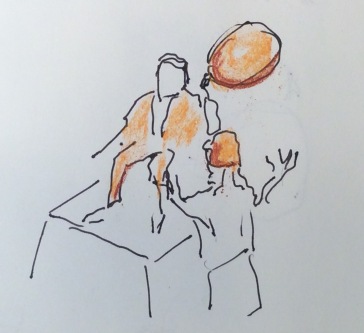 The Woman in the Moon is also a poem by Carol Anne Duffy, whom I have long admired.  Perhaps one day I will illustrate her words, having found them by chance for this post.

5 responses to “The Woman in the Moon”