I have been dealing with the giraffe all day, but meanwhile here is a whale.

The Woman in the Moon is a comedy from about 1590, which forms part of a historical repertoire of works to be performed by boys’ companies.  The first woman, Pandora, is created by Nature and gifted with attributes from the heavenly bodies.  The disgruntled planets conspire to control her temperament, each in turn affecting her mood and desires through melancholy, ambition, aggression, romance, lust and deceit until Woman finally finds her natural state in the changeability, verging on madness, induced by the moon.  At the end, Man, as her husband Stesias, is condemned to always follow slavishly in her wake, admonished to never act on his anger in violence.

As such it is an … how can I say this … interesting choice of play for these times, performed and indeed toured by the all-boys school attended by my nephew.  What ever one may think of the play, it was well acted and they are, I am told, to be filmed for the BBC.  I am curious what lessons the boys drew from their participation.  What are we to understand from this contemporary performance?

We arrived late and unable to get seats, watched from a high balcony far back.  This did allow me to draw, albeit small scale and in the dark.  Here are Jupiter, and then my 12-year old nephew, probably the youngest in the cast, as Hermes casting his mercurial influence to induce in Pandora, sly deceits. 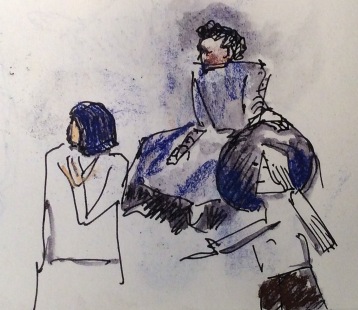 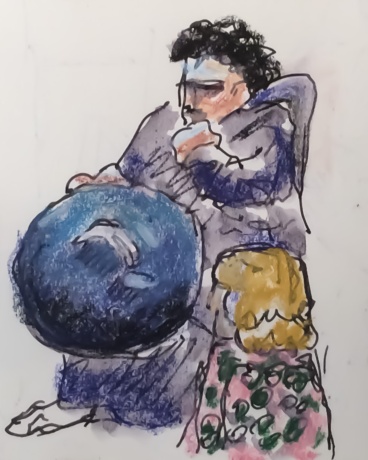 The Woman in the Moon is also a poem by Carol Anne Duffy, whom I have long admired.  Perhaps one day I will illustrate her words, having found them by chance for this post.

I came across Post Modern Jukebox for their great cover of George Michael’s Careless Whisper (at the time, I was practicing that melody myself, badly, on guitar).  They are a rotating musical collective playing current songs with a 1930s jazz twist, brainchild of New York jazz pianist Scott Bradlee.  My daughter and I got into watching their prolific output on YouTube.  Try  Haley Reinhart singing Radiohead’s Creep or again singing All about the Bass with a three other vocalists.

They are still on a UK tour.  We saw them in snowbound Birmingham on 2nd March.  For me the star was diminutive, understated clarinettist and saxophonist Chloe Feoranzo.   I did not get the names of the guys – the bassist, the trombonist and the tap dancer.  The other singer shown below is Dani Armstrong (the linked video is not official – the best I could find is shot from the audience in another performance).  The unnamed pianist in this performance was not Scott Bradlee (a real franchise this operation!).  Ahead of Dani’s Chandelier, he slowly captured the audience’s attention by building a series of cadenzas, subtly shifting the key with each iteration.  Not pictured here is Emma Hatton, English singer who took on Haley Reinhart’s numbers on this tour. 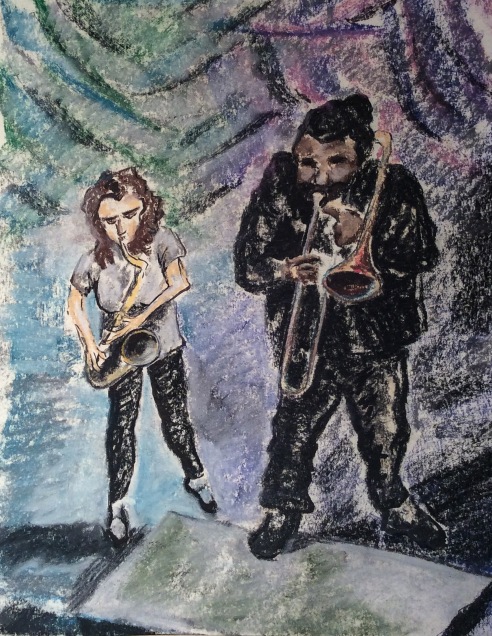 These were drawn afterwards from memory and poor quality shots taken on my phone from far away.

As I say, PMJ is not a band but an ever-changing collective.  I would like it if they gave more credit to the singers and musicians they recruit as they roll through each country on tour.  They deserved the plaudits and I have had to scour the net and twitter to identify those I could.

I am pre-occupied with writing a funding proposal for a clinical trial whose title includes the words “Gastro-intestinal Immune-RelAted side efFFEcts”.  From this my clever colleagues extracted and highlighted the letters to spell Giraffe which is now the trial’s name.  I drew a quick sketch to serve as the logo, at least for now.  I presented the rationale and scientific design at a national workshop last week – but the name is what grabbed attention first.