These were drawings in Cresswell Dale: first, the wooded valley floor, probably first carved as a subterranean river then collapsed leaving steep sides and a flat uneven floor, with the waters sunk out of sight.  It is overgrown, gloomy and moist, with shaggy moss covering the dry stone wall and fallen branches.  Light filters in and captures the leaves.

I thought about my mother’s life as elections, starting with the story of the night of the axe.   This must have been the 1966 general election, when Harold Wilson held power for Labour.  We were asleep, my parents listening to the results on the radio.  They were interrupted by loud shouting. Upstairs, two women shared a flat and undertook sex work.  Taking a night off, they had invited friends over to listen to the election, and these lads had casually decided to rape them.  My father stormed upstairs (we held their spare key?) wielding the wood axe, and my mother heard the boys shinning down the drainpipe outside our window.  All was put to rights.  Some hours later, the shouting started again.  Back he went again with the axe, this time cornering the boys.  They had come back for the beers they had left behind and they trooped off sheepishly.  This is not intended as a funny anecdote – but has a feel of time and place. 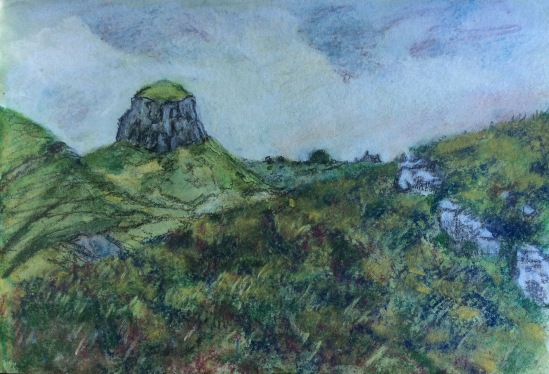 This drawing is of Peter’s Stone, a local landmark which juts out of the hillside, in the dale near Tideswell where my mother lived.  The lowest image is of the field sketch, in watercolour and conte crayon.  I re-worked this many times, lifting and replacing the crayon and eventually drawing into it in graphite.  Photographing it in different light changes the image. 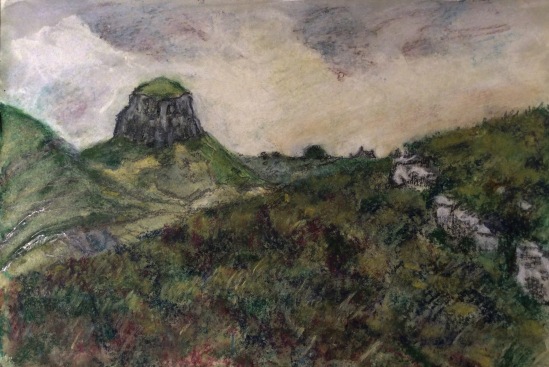 That was told to me as a story and so comes complete.   Much more recently, my memories are fragmented – made up of conversations at the time, not documented or rehearsed.  My mother was in Malawi in the early 1990s and the first democratic Malawian election was held then in May 1994.  The first South African post-apartheid presidential election was just 3 weeks before.  I think I have this right – she served as an observer for both elections.  This established her as an experienced election observer in difficult places.  So then she was again an observer, this time in post-conflict Balkans.  I thought she served in Serbia and Montenegro, but I cannot track that election.  Was it the Bosnian 1996 election?  What I recall her telling me was that people were returning to vote in areas from which they had been ethnically cleansed and those who had persecuted them stood their ground, armed.  Most observers were British ex-army mid-rank officers, pompous and ineffectual.  She was a short round grandmother and so commanded respect: she stood her ground.  The memory that troubled her was that the people who must surely have committed crimes, more than crimes perhaps, were affable and funny.  As she kept order and gave space for people to exercise their franchise, these men flirted with her and she liked them despite herself.

These drawings come from Cresswell Dale, a limestone valley near Tideswell in the Peak District.  This is the place I associate most with my mother’s life.  She lived here when she was the age I am now.

I have been remembering what she told me of her life as locations.  She grew up in West London but was evacuated during the blitz to live with relatives near Hereford.  Her father had broken into the middle class through patient hard work and night school and she was the first family member to go to university, the London School of Economics.   She was made to live at home, I think.  Her early married life and my childhood was spent in the ground floor of a terraced house, without bathroom or inside toilet, in South London.  With £100 loaned by the bank, they bribed the previous sitting tenant, an all-in wrestler, to state they were family so his cheap fixed rent agreement could be transferred to them.  On moving in, they found the inside of the wardrobe layered in used condoms.  Later, we had a larger house in leafy suburban Coulsden, on the edge of the North Down, where her first dog was a fox-terrier who became progressively feral as he aged and one by one the family left home.  Later she lived in Normandy in Surrey where her partner’s dog was an English pointer, Jake, then in Leigh near Wigan with a great dane, Kate, then Tideswell with her last dog Mushie the Weimaraner.

When she retired, she bought a small van and proposed to travel round the country and perhaps Europe, having adventures. Fear caused by wind vibration on a river-spanning bridge put paid to that plan.  She had acquired a taste for working abroad as an external examiner in Kingston, Jamaica.  She joined Voluntary Services Overseas, offering her managerial and public service skills to a non-governmental organisation running social services.  I met up with her when she was living in Malawi.  Her flat had a tree yielding fresh avocado in the garden.  We went together to river camp where hippopotami nosed and bellowed outside our hut.  Her first assignment came to an end when she exposed corruption rampant among its leadership.  Later, I took my young sons to meet her during her stint carrying out a similar role in Macedonia in south eastern Europe.  She had befriended a younger volunteer, Suzanne, who was running a children’s hospital.  They worked, drank, smoked, laughed and played endless merciless  games of Canasta.  We all went to the highlands and skied for the first time.  My son acquired his taste for baklava, the sticky honeyed pastries of that part of the world.

Her last location was in Kenilworth, opposite a castle famously visited by Elizabeth the first, now with a wall missing, mined in the English Civil War.  Here she lived alone at first, until my sister moved in.  My mother saw her through her pregnancy and degree studies, and was co-parent and co-conspirator for her grandson through his first eleven years.  My sister saw her through health crises and the strokes and progressive blindness which took her ability to read and much of her independence.  Her garden was her great passion in Kenilworth, the soil enriched because the house was built on the site of a market garden.  The beds were densely packed, a seemingly chaotic riot of flowers, fruits and vegetables.  She worked in her garden to within a day of her death.

For some time, my mother lived in Tideswell, a stone-built village in the Peak District, grown up round a large parish church (“the cathedral of the peaks”), where buying a loaf of bread would take all morning as people circulated their news and thoughts.  This was when she was principal of a college in Sheffield, owned Mushie the mushroom-coloured Weimaraner trout-poacher, was in a relationship with a former tank commander who lived by selling lingerie and wine; and before, redundant, single-again and bored, she escaped grandmothership to work in Malawi and Macedonia.

This weekend, I returned to Tideswell, chasing memories of the dales where we walked the dog.  But I could not match the images in my head to the places I found.  This one place I do remember: parking in Millers Dale, traversing the viaduct which once carried quarry stone on rail tracks, dropping down steps to the river Wye.

Whereas before we would follow the course of the river beneath the trees, now I deviated up a path across open fields.