In recent sketches I have sought to capture the effects capture sunlight on and behind trees using my standard field kit of conte crayons, ink and water.  In the earlier sketches, I drew on textured white paper, dampened so the crayons layer thickly and reworked the drawing later with paint.  Then I started explore the use of toned paper, struggling to leave unworked negative spaces to form part of the image.  The most direct inspiration for this is from the recent sketches of professional artist and blogger, Rosie Scribblah as well as the current explorations of trees in other media by my occasional art buddy, outsideauthority.  Unlike my previous drawings, ones shown here are all completed in the field, not reworked at home.

Last week, returning from drawing at the burial ground, I found a footpath along fields which skirted Nunnery Wood, fenced off on the western side.  The evening sun filtered through the trees and last year’s undergrowth glowed.  In the first sketch,  at the top, the tan surface just about shows through between the short strokes of grey, an attempt to suggest the sky broken by branches into intersecting polygons.  In the second sketch, the surface shows through the light strokes showing the fields but I still could not bring myself to leave the paper untouched. 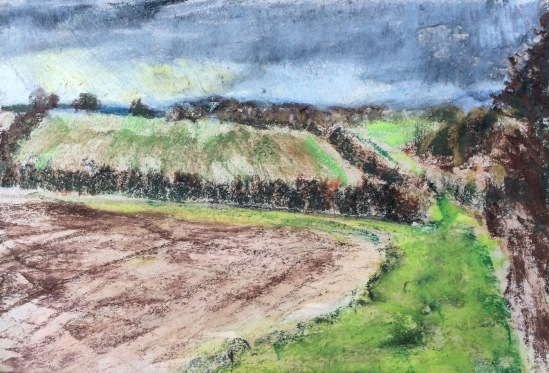 The next two were done today, closer to home in Sidden Hill Wood.  The low sun slanted in from the left so the many small branches and early leaves scintillated in the background and the nearer trunks glowed green and gold.  I drew on machine-textured Ingress paper.  Having completed the first as well as I thought I would achieve, for the second I tried to  abstract the woods into simple blocks of lightly applied colour through which the toothed paper still shows. 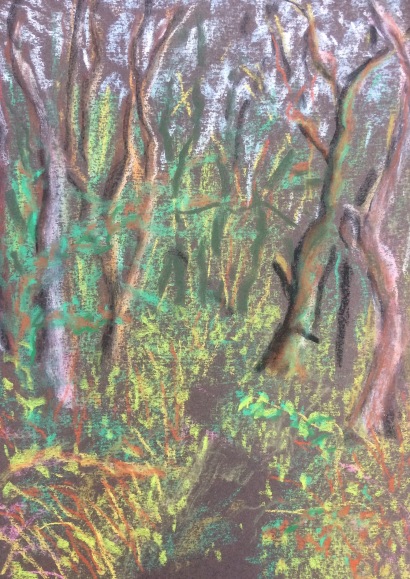 10 responses to “light on trees”