I first caught up with the music of Leonard Cohen about 4 years ago, finding by chance a broadcast of his live compilation video, Songs from the Road.  I was captivated from the start, as the camera pans across the applauding crowd in night time Tel Aviv and Javier Mas builds on the opening chords with a solo on the mandolin before Cohen starts singing.  As they pass the music between them, from verse to instrumental solo and back again, Mas is caught on camera shooting Cohen a look, as between two old men in hats playing dominos outside a bar. 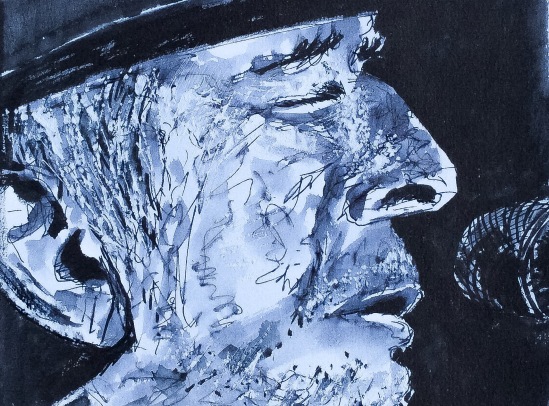 If you are the dealer, I’m out of the game
If you are the healer, it means I’m broken and lame
If thine is the glory then mine must be the shame
You want it darker
We kill the flame

Because I first found Cohen so late in his career, it feels to me that all his life he wrote poetry that was waiting for his old man’s voice of gravel, rich with humanity and experience.  The song, Suzanne, was written when I was a small child but I came to it fresh when I was myself beginning to become old.  It has so many beautiful and intriguing lyrics: “And she feeds you tea and oranges,  that come all the way from China” captures a sense of transitory seduction.  The second verse makes no sense as a narrative but seems to reveal some profound truth, borrowing and warping Christian imagery “And Jesus was a sailor when he walked upon the water, and he spent a long time watching from his lonely wooden tower, and when he knew for certain only drowning men could see him, he said, all men will be sailors then until the sea shall free them.  But he himself was broken long before the sky would open forsaken, almost human, he sank beneath your wisdom like a stone.” 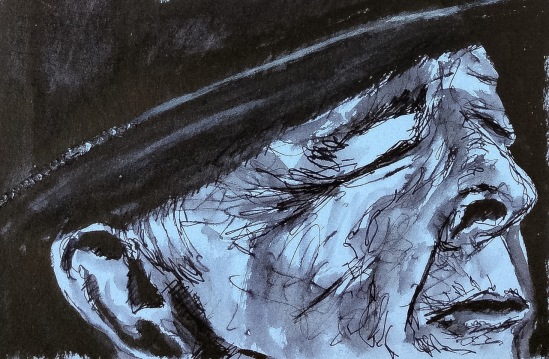 I have long intended to draw from this album.  This week, I have spent a few minutes late at night revisiting the video and trying to capture his face in ink, knife and crayon. I have also been reading The Pigeon Tunnel, reminiscences by John le Carre from a long life collecting material for his diverse novels, from the spies fighting the Cold War to post-communist Russia under criminal gangs, to the bite of big corporations on the powerless. 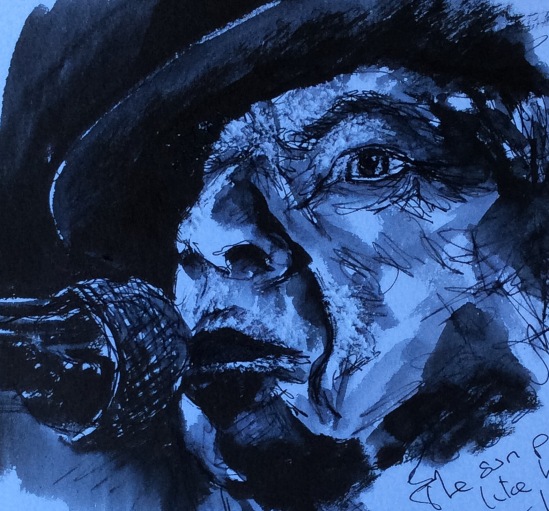 Early in life he witnessed the cycle of pigeons trapped on the roof, channelled through tunnels, emerging in sunlight in the sight of the sportsmen’s guns, the survivors returning to the only home they know on the baited roof.  His horror at life as a rhythm of hopeless struggle in the face of uncomprehended powers runs as a thread through his anecdotes and creates humanity and wisdom in his novels.

These are my sketches of the bronze sculptures, placed in the setting of Pompeii’s ruins with the looming presence of Vesuvius behind.  These were done using fountain pen, water, conte crayon and Faber Castell grey brush pens.

I was struck that most of these mock-mythical figures are male.  Though cracked and fractured through pseudo-millennia, they are endowed with mouths and genitals.  The female figures are sparse, without heads and with genitalia obscured, typically by small grotesque masks. 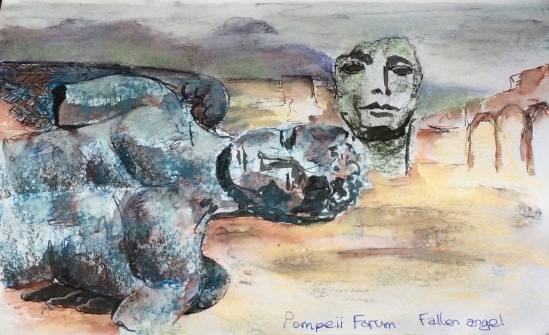 Pompeii forum, with the fallen Icarus (fore), with Tyndareus, father of Helen of Sparta (back) 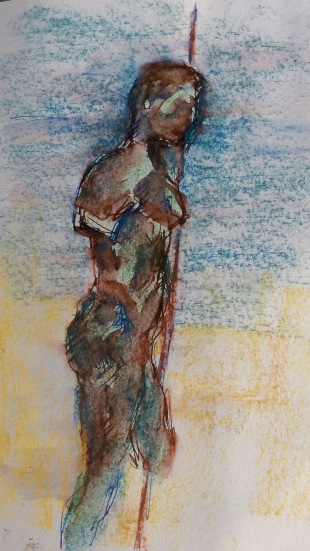 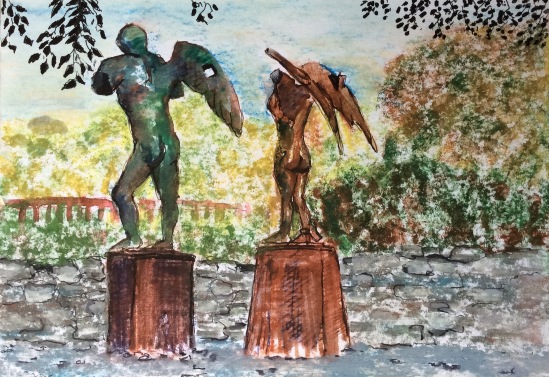 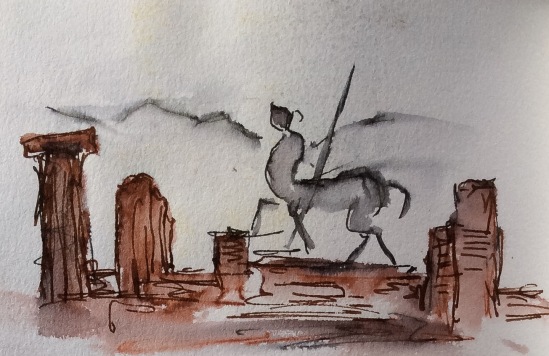 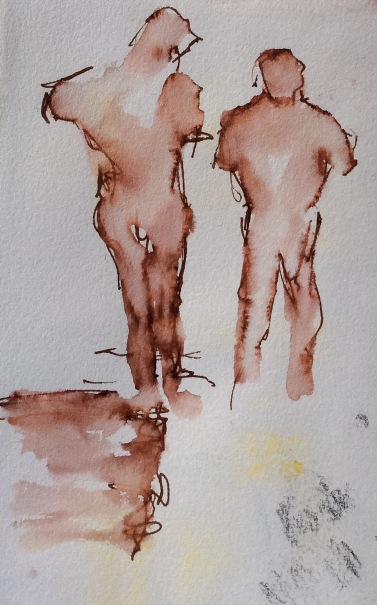 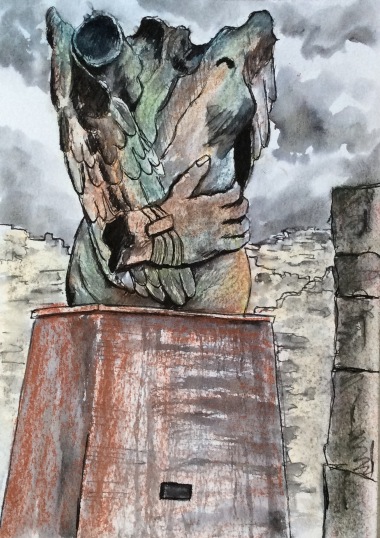 Intersection of main roads in Pompeii: winged Eros with hand. 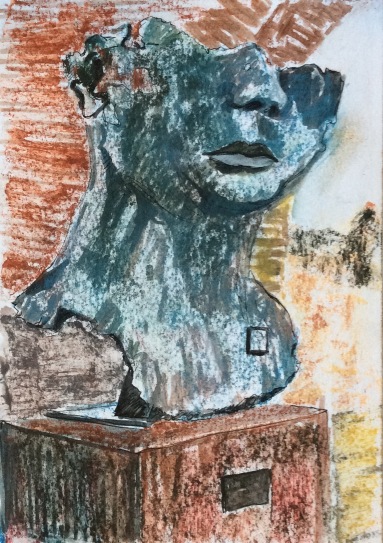 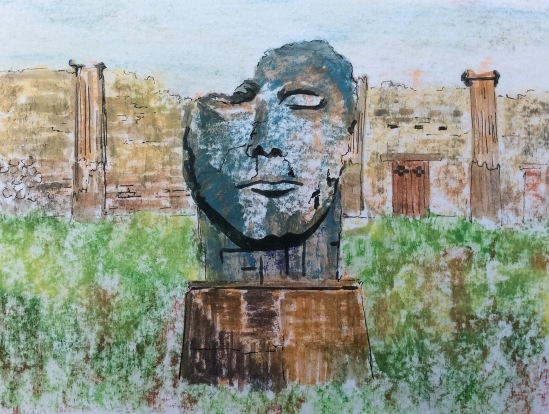 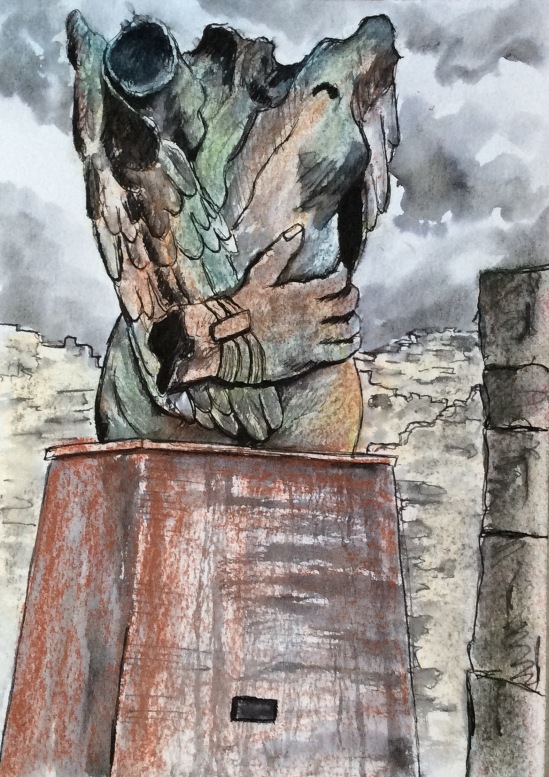 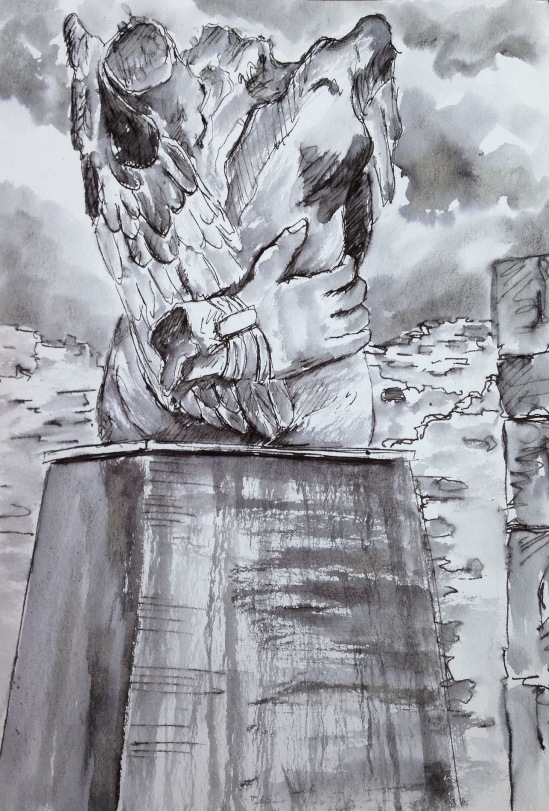 Waking alone in a hotel room on Wednesday 9th November 2016 I am on the brink of discovering the outcome of the election, across the water, for US president.  This is one event which will surely affect us across the world.  The fear that America will choose as its leader an infantile vengeful narcissist overshadows the historic possibility that it might instead elect its first woman president.

Igor Mitoraj’s monumental sculptures are shaped to suggest their disintegration through the long passage of time.  Here, a vast bronze broken bust is positioned in a room adjacent to the bath house destroyed two millennia ago by the super-heated ash falling from Vesuvius.

This piece is named Sulla riva grande scripolata.  As best I can tell from online translation, this means “on the greater shore, cracked”.  Whatever the events of this day, there will come a time when our civilisation will be known by the cracked fragments found protruding from the pebbles and silt of the river bank.