The river Gannel has created a narrow tidal flat between steep sided low hills.  I came upon this from the side where a smaller spring joined the flow.  I cycled as far as I could until my road was submerged, stopped there, looked down and drew the water as it flooded and retreated against the silt, grass and planks bordering the path.

I drew, as usual, in fountain pen and water, light strokes of conte crayon and then strengthened the shapes of the wavelets with brush pen and black ink (shown below).  The heavy black ripples were a mistake, unbalancing the sketch.  I wanted to highlight the posts and planks against both silt and water.  Dissatisfied, I reworked the mud bringing in pinks and blues to supplement the ochre.  I rebuilt the wavelets textured white acrylic ink and, when dry, rubbed in crayon, losing all but a few white reflections.  It won’t bear further manipulation and the image is now too distant in my mind, so this (above) is how the sketch is finished. 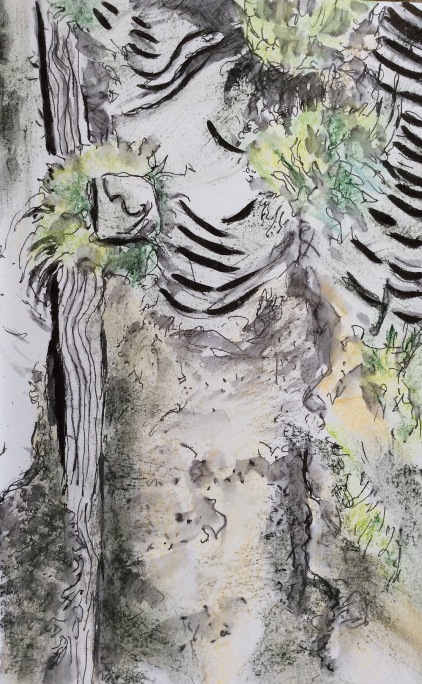