I tried to get a ticket for the Labour Party’s State of the Economy conference on Saturday 21st.  Labour has commissioned  leading economists to help build an economic model supporting a fairer society, as well as expert reviews on the workings and failings of the financial institutions.    It was sold out in under a day.  So I reverted to our original plan: my older son looked after the younger children and Jane and I went to the Old Joint Stock pub where Dr Sketchy’s anti art school had taken over the upper floor theatre as part of a Festival of Cabaret and where, by pleasing coincidence, they were also celebrating a Festival of Gin.

Compered by jazz singer Liberty Pink, it took the theme of burlesque cabaret, with music and appearance recalling the brittle cheer of a world on the edge of calamity (as in the film Cabaret).  Liberty Pink sang at least one Kurt Weill number, the heartfelt “je ne t’aime pas” in its English translation. 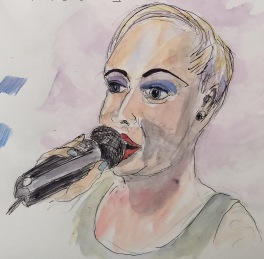 This music speaks to me.  Growing up in the 60s, we had a limited set of vinyl records and one I played repeatedly was Kurt Weill’s Die Dreigroschenoper (the Threepenny Opera) with Lotte Lenya’s voice switching between frantic despair and soaring fantasy as she dreams of liberation from … well, liberation from all men, through the agency of pirate slaughter.

Previously, I had used fountain pen and conte crayon with reasonable effect for 20 minute poses, but had really struggled to make decent drawings like this for the 5-10 minute sketches in the Star Wars themed Dr Sketchy’s.  This time I had pre-planned my approach: each sketch had brief pencil construction, mark making in permanent ink and a limited range of pre-mixed colour daubed with a water brush.

Burlesque in the 1930s had come to mix female striptease with bawdy and irreverent humour.  This Dr Sketchy’s session unashamedly celebrated humour and vibrant humanity through drawing (without striptease!).  Thank you to Liberty Pink, Miss Malone, Verity Grey and Kitten von Mew who modelled for us, and to Lisa who is the force that makes Dr Sketchy’s happen in Birmingham. 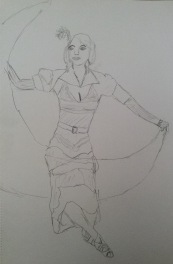 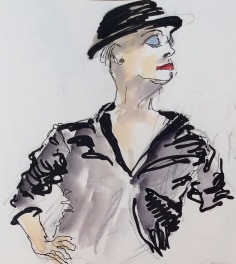 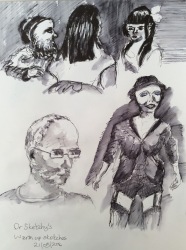 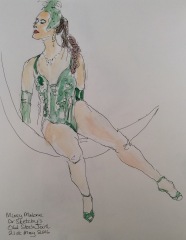 It was a great afternoon and for us a kind of married date day: a chance to get out together, sit in a pub with fun music and drink two different gins, surrounded by diverse people united in drawing.  My wife’s pictures in graphite and soluble colour pencil are mixed with mine in the gallery above.