I tried to get a ticket for the Labour Party’s State of the Economy conference on Saturday 21st.  Labour has commissioned  leading economists to help build an economic model supporting a fairer society, as well as expert reviews on the workings and failings of the financial institutions.    It was sold out in under a day.  So I reverted to our original plan: my older son looked after the younger children and Jane and I went to the Old Joint Stock pub where Dr Sketchy’s anti art school had taken over the upper floor theatre as part of a Festival of Cabaret and where, by pleasing coincidence, they were also celebrating a Festival of Gin.

Compered by jazz singer Liberty Pink, it took the theme of burlesque cabaret, with music and appearance recalling the brittle cheer of a world on the edge of calamity (as in the film Cabaret).  Liberty Pink sang at least one Kurt Weill number, the heartfelt “je ne t’aime pas” in its English translation.

This music speaks to me.  Growing up in the 60s, we had a limited set of vinyl records and one I played repeatedly was Kurt Weill’s Die Dreigroschenoper (the Threepenny Opera) with Lotte Lenya’s voice switching between frantic despair and soaring fantasy as she dreams of liberation from … well, liberation from all men, through the agency of pirate slaughter. 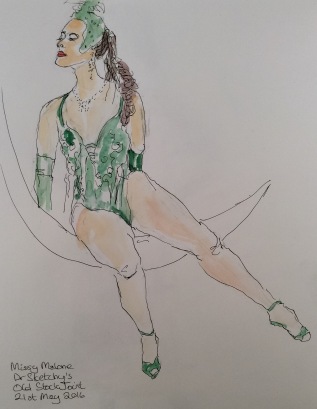 Previously, I had used fountain pen and conte crayon with reasonable effect for 20 minute poses, but had really struggled to make decent drawings like this for the 5-10 minute sketches in the Star Wars themed Dr Sketchy’s.  This time I had pre-planned my approach: each sketch had brief pencil construction, mark making in permanent ink and a limited range of pre-mixed colour daubed with a water brush.

Burlesque in the 1930s had come to mix female striptease with bawdy and irreverent humour.  This Dr Sketchy’s session unashamedly celebrated humour and vibrant humanity through drawing (without striptease!).  Thank you to Liberty Pink, Miss Malone, Verity Grey and Kitten von Mew who modelled for us, and to Lisa who is the force that makes Dr Sketchy’s happen in Birmingham. 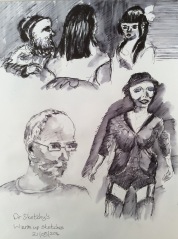 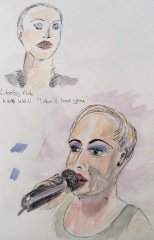 It was a great afternoon and for us a kind of married date day: a chance to get out together, sit in a pub with fun music and drink two different gins, surrounded by diverse people united in drawing.  My wife’s pictures in graphite and soluble colour pencil are mixed with mine in the gallery above.

This is the second set of sketches from a day around Soho House in Birmingham at the end of April.

Just round the corner from 18th century industrialist Matthew Boulton’s grand house I found a view down the road of a boarded up burnt out pub, the Beehive.  I chose a spot to draw where a wall served as a table, although this meant the composition was divided in half by a tree trunk.  This sketch was done on the wreckage of a previous drawing, scrubbed out and painted over in irritation with  white gouache.  I was curious to see how this surface would react to another layer: it resisted the crayon and lifted and merged with the new marks when I applied wet media.

Earlier in the day, I found a place looking across rough grass, weeds and a display of daffodils in the yard of the Church of England parish church, looking at the Methodist chapel across the road.  I was fascinated by a group going in and out the doors near me, mostly men, all young with very dark skin, speaking low  a language with (I guessed) African cadences, several putting on and taking off white robes.  They told me they had just finished rehearsing the Passion for Easter the next week, the Orthodox festival for the Eritrean community.  Had I realised sooner, I might have asked their permission to draw the rehearsal.

Soho House was the elegant Georgian dwelling of the industrialist Matthew Boulton who, working with James Watt, developed steam power to support mechanisation in factories.  HIs mint first struck the large British copper penny which I remember being still in circulation when I was a child.

The Birmingham urban sketching group met there a couple of weekends ago.  Walking there along the dual carriageway opened my eyes to the varied urban landscape, dotted particularly with widely diverse places of faith.

My first sketch, a warm up, was lightly drawn in pencil, worked up in pen and then again in crayon.  It was intended to be much more abstract, incorporating the lines of the building right into the tree shape, but deviated to become more straightforwardly representational.

I was less interested in the House itself than in the backdrop of smaller homes set at angles to one another yet sharing one roof.  This I worked up in pencil then pen, aiming to capture especially the reflections on the windows.  Eventually I brought in a wider range of colours and tones with conte crayon.

My approach to drawing has descended to making random marks in fountain pen secure in the knowledge that I can use water to move the ink about, disguising my sloppiness.    I can take things further and obscure the whole thing with conte crayon.

in this interior sketch, I used ruled lines to delineate the shading and reflected light on straight metal bars, contrasting this with looser lines building the wooden beams and panelling.  A simple trick I learned too late was to paint in soft shadows directly using the water brush, carrying ink lifted from the pen nib.  This would have worked better for the glass globes on the chandelier than what I show here, bleeding the tones from strongly drawn lines.

Reverting to pencil, I surrendered to the discipline of a straight edge to show light reflecting on the wooden panelling and plaster walls, contrasting this with the rough and curved surfaces on the pottery and the wavy hair lines on a fellow artist.

The upper rooms of the Malt Cross in Nottingham sit above caves hewn in sandstone, once used to keep cool ale.  Here the intersecting surfaces are of the rusting metal casing and smoother radiating fins of some contraption set against cracked stone and pointed bricks.  In a first quick sketch, I used my usual pen lines, liberated with water and a light dusting of crayon, using colour to set apart the surfaces.  In the second, I attempted to use just the pencil marks to show the same thing. 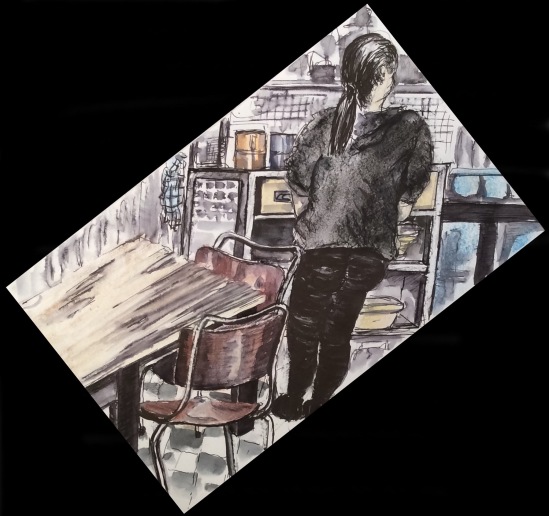 This last drawing was from the following day, sitting with my children having breakfast in a café before going to watch my wife cross the finishing line in a 10K run (a creditable 56 minutes 9 seconds).  This composite of several waitresses as they each stood at the counter was drawn directly in pen and water, finished again with conte crayon.  Although drawn first in loose lines, I corrected the straight lines with a ruler, to set these against the curved bars of the seats.  I have tried make the marks differentiate between the rough wooden table and the finer grained seat backs, the loose weave of her hooded top and stretched fabric of her leggings.  I applied a minimum of crayon to a few surfaces, rather than obscuring the drawing by flooding the image with colours.