I am trying to infect as many members of my family with the drawing bug as possible.  My sons remain immune  but my wife was lured by drawing in a pub and  my daughter has come out drawing in the countryside with me several times.  She has become quite interested in this social activity of urban sketching.   Here are a mixture of drawings in museums, the first is mine in the Natural History Museum in London.  The rest are a mixture of mine and my daughter’s from an urban sketching trip we did together in the Think Tank in Birmingham.  Three pictures I have posted already but here are placed along side hers. 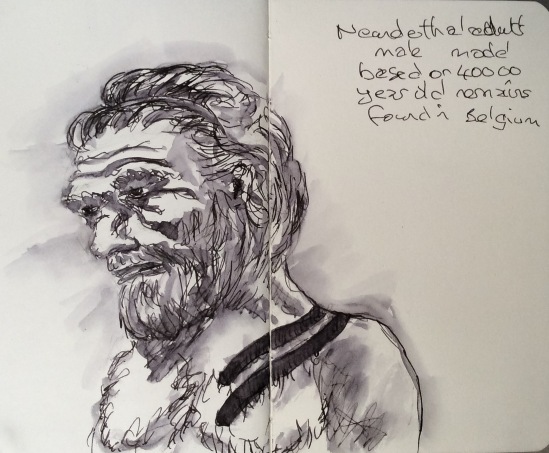 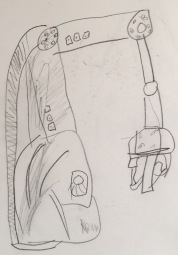 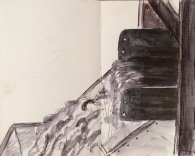 While I drew the giant deer skeleton, she turned to the smaller stuffed animals on display. 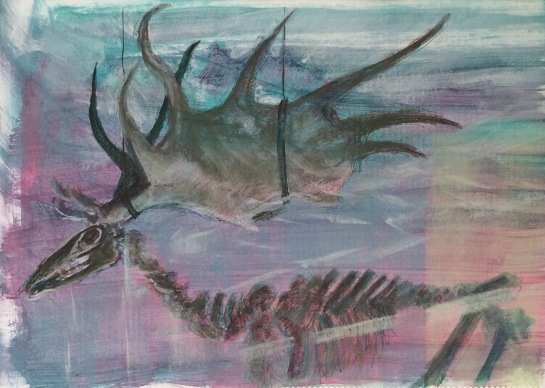 We also drew people.  One of these is a picture of me, another by me of another sketcher, Raj.  The rest are of people mostly in the café. 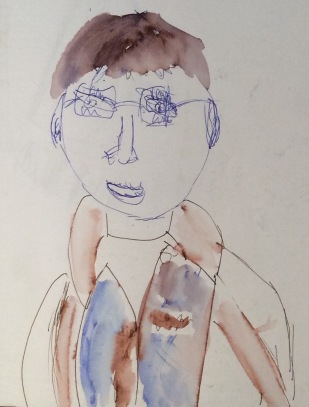 For completeness, the last was drawn where we shared breakfast before we went to the museum.  It is my sketch in fountain pen of part of the Birmingham law courts.

I had raved so much about my first Dr Sketchy’s Anti Art-School session, drawing with cabaret and a beer, that my wife decided that next time she would come too.  She never draws, at least not since drawing the Esso tiger in junior school.

The great Dr Sketchy’s team in Birmingham put on  series of ten minute poses over four hours.  My wife drew clear bold lines in charcoal.  For the storm troopers, I blocked in reflected light in pink and blue conte crayon , then drew into it with black brush pen. 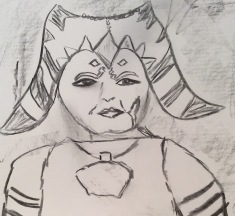 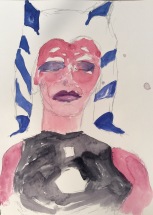 This character Ahsoka comes from the Clone Wars cartoon series, which I never watched.  The model played her with sense of aloof power.  I was struck by her dramatic lips and eyes.  I drew in pencil and then watercolour.  I keep meaning to go back and work into this in conte crayon – I don’t feel I captured her essence here. 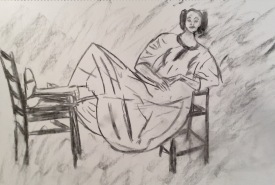 Mysti Vine played a fabulous Princess Leia.  I like my wife’s drawing particularly though she is dismissive, claiming the best part of her drawing is the furniture.  There is something about her composition that works really well for me. 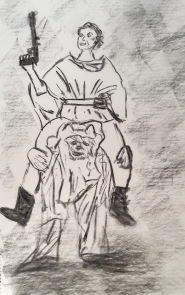 Kitten von Mew played Leia riding an ewok.  What is not to like about this costume?  On Facebook is a photograph with her in costume sharing a platform with Warwick Davis, who played the ewok Wicket in the third (or sixth) Star Wars episode. 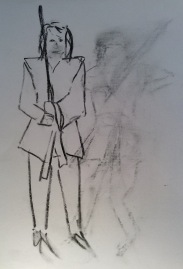 And to finish, here are the masters of the force, Sith and Jedi.  Lisa, who organises the Birmingham Dr Sketchy’s sessions, played Anakin, the young Darth Vadar.

Personally, I am impressed with my wife’s drawings which are clearer and more expressive than my attempts.  For ten minute poses, I need to simplify my tools.

This is an idea I took from Rosie Scribblah, an artist in South Wales whom I know from her blog and whose work I greatly admire.  A while back she posted many sketches on prepared grounds, made of brown paper fragments pasted into the sketchbook.  I tore up my lunch bag and stuck it onto some pages.  On others I applied acrylic paint.  This was done weeks before my using the pages to draw.  The idea was to fragment and distort my thinking while translating observation into drawing.

Here are a mixture of drawings.  The prototype Mars exploration suit, giant deer skeleton and trolley bus were done this weekend in the Think Tank, Birmingham on an Urban Sketchers session.  The first was built on an area of yellow paint, heavily textured.  The skeleton was drawn on a page covered with a mix of green and rose paint, greying where they met.  The drawings were done in fountain pen and conte crayon.  Mixed in with these are my first attempts to use prepared grounds, birds drawn from life onto brown paper and paint, one from 2014 and the others from a week or so ago. 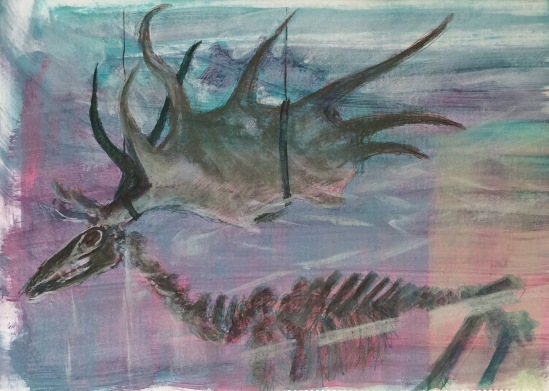 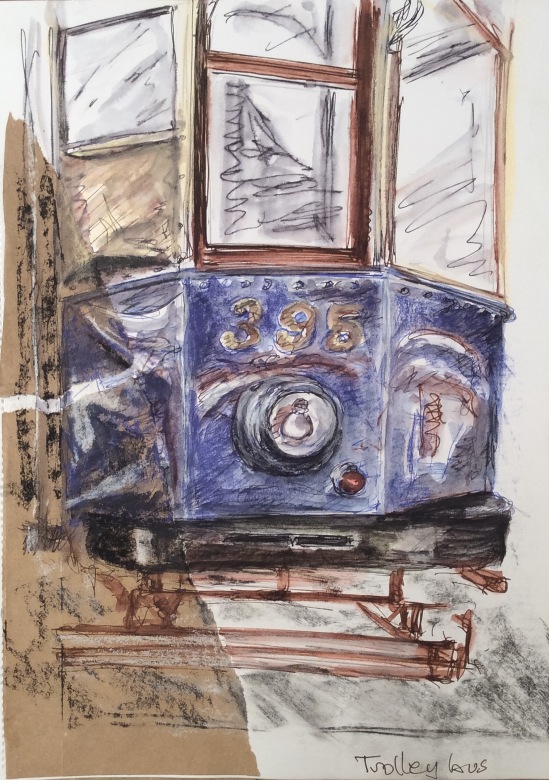 As an aside, I have watched Rosie’s fascinating artistic journey across her recent blog posts as she abstracts from the landscape to produce stunning images of ancestral stone monuments in the South Wales hills.

Here are three sketches done when out and about this week.  The first was done in watercolour over pencil.  I sat in the upper story of a bird hide and looked down to where the woods on my left threw long shadows on the meadow, otherwise lit golden by the evening sun. 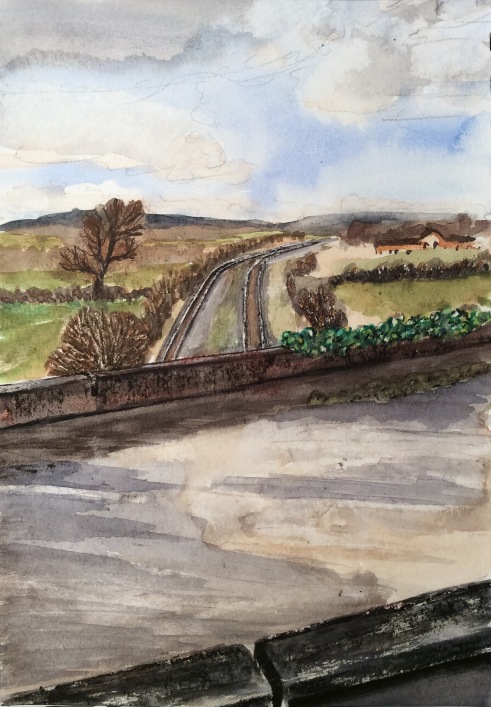 The second was also watercolour over pencil, with texture and highlights added using cote crayon and knife.  This was a remarkable viewpoint, on the footpath sunken nearly four feet behind the canal, itself contained within iron cladding on the aqueduct crossing the railway.  The odd perspective comes about because I was looking vertically down on the cleft in the near canal side but horizontally at the one on the far side as well as the railway, woods and hills beyond.  I have resisted the temptation to score it out in an attempt to correct it. 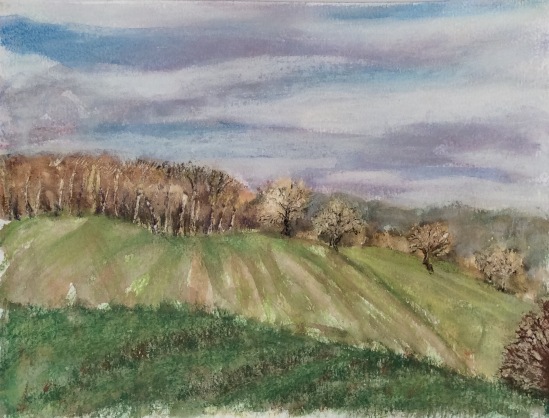 Earlier in the day I crossed low rolling farmland and patchy woods.  This sketch was done in watercolour and then I worked over it in conte crayon.  It became too laboured. Later, I erased much of the crayon on the fields and woods and re-applied it with a lighter touch, while retaining the dense chalky opacity in the layers of cloud above.  The part that appeals to me is the mid ground trees on the right. I had taken these right back to white with sandpaper and worked more sparingly into the heavily textured surface, aiming to re-create the sense of light filtering from behind through the branches and early buds.