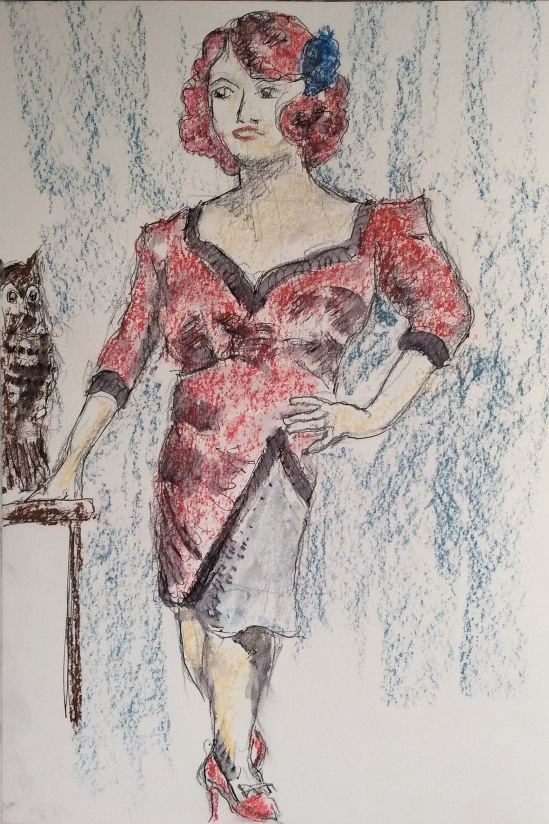 Here are 20 minute poses for Rose Thorne, Benjamin Louche and Suzy Sequin.  Rose Thorne posed elegantly.  I know very little of the owl in Twin Peaks.  From Youtube I learn that a message is passed on, perhaps from an extragalactic source, that the Owls Are Not What They Seem.

Mr Louche looped in, mask and megaphone in hand, declaiming from the Twin Peaks sound track.  I tried to capture him on paper as I do with wildlife, tracking his movements then shutting my eyes for a moment to try to fix the image on my retina before drawing. 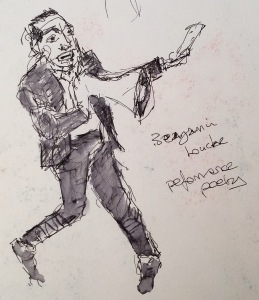 As he stood stock still, the double bass sounded the rhythm, over which the refrain The Black Dog Runs at Night repeated, over and over.

Benjamins Louche’s own wordpress blog is here.  On the day I accessed it, the lead post was a haunting dream sequence with a grainy black and white photograph.  Beneath this is a charcoal drawing of a face, animated to jerk slightly, in and out of focus.  One aspect of his persona is as cabaret and burlesque host. It turns out he and Rose Thorne are married.  Also he appears in Star Wars, the Force Awakens, but under heavy prosthetic make up.

The last of these three images from Dr Sketchy’s is, I guess, classic burlesque.  The model is Suzy Sequin, to whom my sketch did not do justice.

I have known of Dr Sketchy’s for a year or so but this was my first time attending.  This  indie alternative art movement breaking the art class rules was founded in 2005 and has spread with branches in major cities world wide.  Burlesque and cabaret seem common themes through the drawing events, less exposed flesh but more edgy than a life drawing class. On the day I went, the audience was of wide age range, and mixed gender and ethnicity.  The combination of great models, drawing, entertainment and beer gets as close to fun as I can imagine.  Now my wife, who doesn’t draw, wants to come.

9 responses to “Caberet and burlesque”