Up and down the roads, I see giant, smug-blue bills being posted, supporting the Conservative Party candidate in the General Election. In this constituency, just 175 votes (0.03% of the electorate) separated the Liberal Democrat winner and Conservative runner-up in 2010. It is a top target for the Conservatives to win.

Our house is divided between Labour (signified by red) and Green supporters (and one undeclared!).  It makes sense to us to support the Liberal Democrat candidate (signified by yellow).  As no party poster represents our views, I have made my own.   It would be fun to see more home-made election bills going up, especially (from my point of view) if they shared this rainbow of party colours. 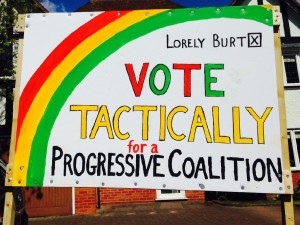 Home-made poster now on display, much to the embarrassment of my family who think I am a bit mad.

The current predictions are that Labour and Conservative will each win around 270 seats, with 325 required for an overall majority.  The Liberal Democrats and Scottish Nationalists will hold the balance of power and, with a predicted solitary Green MP, could support a Labour minority government or left-leaning progressive coalition.  The more seats the Conservatives take, the more likely they are to lead a government, driven rightwards and towards authoritarianism by their extremist wing and partners.

To those who say we should always vote true to the party we support, I say this.  Let the parties take care of themselves.  As voters, we have to game the system against the odds, to get the government closest to what we want.

This was my first attempt at a home made poster.  I like the idea of voter-driven reciprocity to challenge the system whereby parties take some seats for granted whereas a handful of marginal seats determine our futures. Using this website, I was really pleased to have had a promise of a Labour vote in Hammersmith from a Lib Dem supporter in exchange for my Lib Dem vote locally.  However, the vote swapping site seems to lack sufficient participants to be really viable.

For the last year or so I have drawn quickly in fountain pen, committing myself to the lines as they hit the paper, prioritising expressiveness over draughtsmanship, movement over accuracy.

However, I have returned to pencil and have spent more time just watching a single species, even just focussing on the head, aiming to capture more accurately its structure. It is difficult to picture the skeleton and muscles beneath the feathers.  In the lapwing, I think the neck vertebrae articulate behind, not beneath, the skull then bend in an S shape to join the body (see this related species’ skeleton).  So part of what we see as the back of the head is actually the upper neck, with plumage squaring off the shape.  There is a pronounced bone ridge above the eyes. 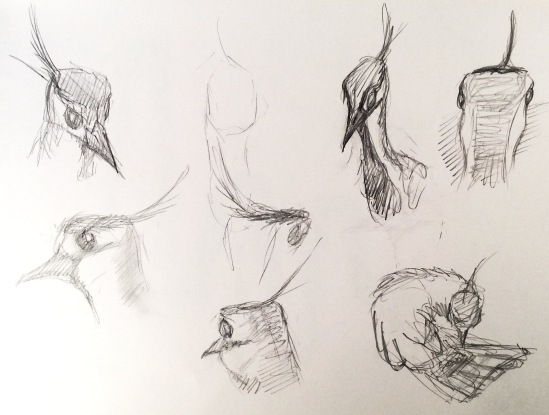 I was uploading these pictures last night when I happened on a programme on the radio which I found profoundly moving.  Mark Thomas is a comedian, of my generation, who cut his professional teeth on the alternative scene biting into Thatcher.  In Bravo Figaro, we meet a man of his time, a South London self employed builder, a hard grafter, with little education and a thirst for self-improvement, and handy with his fists outside the home and within it.  As Mark describes it, his Dad was a bit “punchy”.  This is not a metaphor.  In his father’s prime, the family trod carefully, on eggshells as they say.

We are then taken through the story of this man’s love of opera, his unlikely breaching of the bastions of England’s middle class.  Mark interviews his brother and his mother, interspersed with his father’s words which are few and inarticulate as he now has a degenerative brain condition.  From this he constructs the material for an hour long comedy narrative.  There is no reconciliation, not even forgiveness, no sentimentality but the story leads to that thing I describe here as the gift, both surprising and surreal.

If you are of a certain generation and grew up in impoverished South London or somewhere like it, some of this will resonate. I found, at the end, that I was shedding tears.

A few weeks before the General Election, parties that expect to form governments stand on a platform of “financial rectitude”.

This is strange because it does not seem that peoples’ livelihoods have been threatened by lack of financial rectitude so much as by a cult-like adherence to an economic orthodoxy that sanctifies national debts to financiers over what is owed to the populace. Financial institutions created debts from nothing and sold them as assets. In this cult, money debts carry a moral imperative: sooner that someone is impoverished than the bank is not paid. 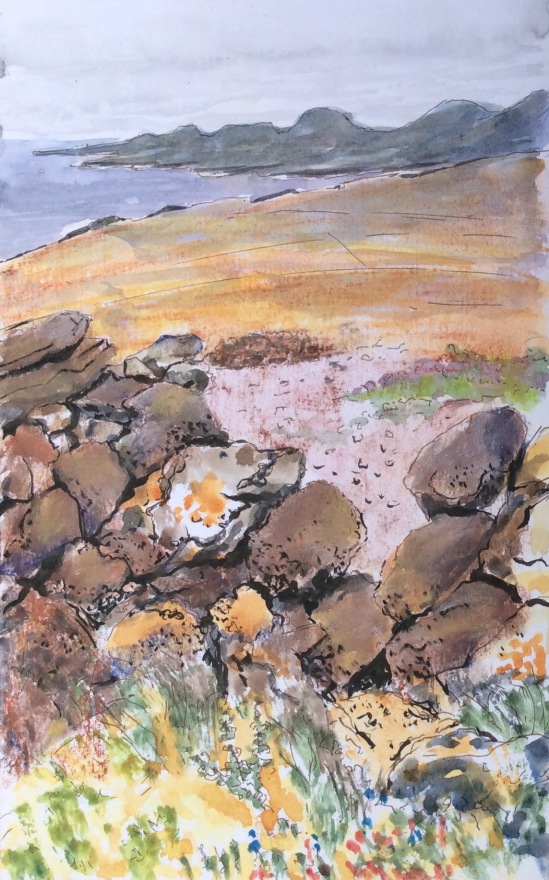 I have found illuminating David Graeber’s broadcast series Promises Promises: a History of Debt, available on BBC IPlayer and based on his book, Debt: the first 5000 years. Part of his thesis is that debt and credit are ancient concepts, reflecting the webs of reciprocity throughout society. Credit and debt are an essential lubricant in human relationships and enterprise, but are inherently unstable: debt tends to accumulate causing poverty and societal unrest. Periodically, ancient monarchs felt obliged to declare jubilees in which debts were annulled. What we call the economy is a much narrower concept, typically focusing on money which for us is the sharing out of national debt as currency that can be taxed.

My other source of economic wisdom is the late Sir Terry Pratchett’s first book The Colour of Magic. The world is flat, carried on the shoulders of four elephants riding on the cratered carapace of the gigantic space-faring turtle A’Tuin. On this disc is the Wyrmburg, a massive mountain balanced upside down on its pinnacle by magic, on which beautiful near-naked warriors do ariel battle on the backs of imaginary dragons. Whatever you do, don’t stop believing: it’s a long way down to crash.

Looking across the caldera. Love tokens writ large in stones in the crater. Conte crayon

I belong to a political party which states the following on my membership card.

The Labour Party is a democratic socialist party. It believes that by the strength of our common endeavour we achieve more than we achieve alone, so as to create for each of us the means to realise our true potential and for all of us a community in which power, wealth and opportunity are in the hands of the many, not the few, where the rights we enjoy reflect the duties we owe, and where we live together, freely, in a spirit of solidarity, tolerance and respect.

Lichens colonise the seaward slopes of the volcano and vegetation concentrated where the scant waters collect in the crater. Pen and ink, conte crayon, clean water.

In this election, the Labour Party is standing on a platform of financial rectitude. Despite this, I choose to believe that, if Labour forms a government, its leader, Ed Miliband, has the toughness, intelligence and decency to respond flexibly and humanely to the challenges of the next five years.

Why is Labour’s manifesto so conservative? I guess that the leadership does see through the global economy as an illusory belief system which, while powerfully mobilising human resource, is also inherently unstable as well as being unfair, cruel and discriminatory. But I can see that it is frightening to challenge the faith. Even when escaping from the mountain balanced on its tip, one rides an imaginary dragon. Don’t stop believing: it’s a long way down to crash.

The Legacy of Rubens exhibition contains many drawings using simple white, red and black chalks on toned paper, by the old master himself and his contemporaries and successors, such as Watteau. The simplicity of this technique is deceptive, requiring clarity of vision, prioritising tones over colours.

The field sketch, above, was done through the window of the bird hide. I aimed to use just black, white, sepia and sanguine conte crayons on warm toned paper, but quickly lost sight of what I was trying to do and gave up.

After returning home, I wondered whether I should have used cool toned paper to provide a contrast with the sanguine chalk.  I started playing with this idea and quickly redid the sketch from memory.  I still am not using the tone of the paper, and found myself using colours in addition to the intended limited tonal range. 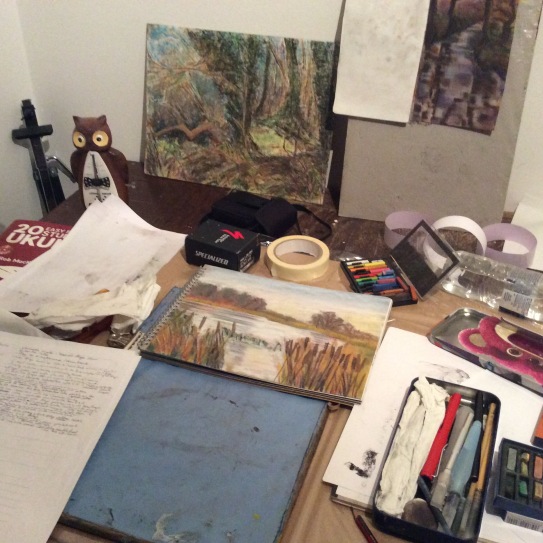 Visiting the Rubens exhibition for the second time, I had intended to draw the pieces in the last room.  However, I was hijacked by my eldest son turning up and shooting through the show’s highlights at speed and dragging me out again to eat at a Lebanese restaurant.

The following then is a written reflection. The last room in the Royal Academy exhibition responds to Rubens’ rolling depictions of human flesh and form, drawing not upon his contemporaries, pupils and imitators but on the responses by current and twentieth century artists.

Walking in, I was captivated by the asymmetrical jaw line, by the teeth bared by the rhomboid retracted upper lip and by the clouded divergent eyes in John Currin’s painting The Clairvoyant.

Three sculptures of “woman” corner the central space.  First, a pole-like single-breasted painted totem, wrought from clay, by Rebecca Warren. Facing this to the left is Sarah Lucas’ installation “two fried eggs and a kebab” (1992) in which these items are seemingly just plonked upon a table in a viciously comic pornographic caricature.  To the right is the same artist’s ‘Suffolk Bunny‘ (1997-2004) in which tan tights are stuffed to ape the female form, clad in blue stockings and clamped to a chair. Facing the hypotenuse of this space is Jenny Saville’s The Voice of the Shuttle, a large composition of carnage and disembodied heads in charcoal and paint: re-weaving a classical myth of rape and revenge, also depicted by Rubens.

I was captivated by the adjacent piece (Picasso: The Dream and Lie of Franco): two printed sheets, each divided into nine panels, satirising the dictator’s claim to represent the best of Spanish culture.