On our last day in Mallorca I took a full day out, hiring a car to drive further afield.  I had seen booted eagles and buzzards  hunting over the Albufereta Nature Reserve but I wanted to see and draw black vultures.  I drove to the Cuber reservoir in the northern mountain range.  This is a wide valley between steep heights.  The slopes were patrolled by what I am sure were common kestrels but their colouring seemed much lighter than I see at home, their wings almost transparent in the sunshine.  High up, out of sight except with a telescope, an osprey watched.

These sketches were drawn in ink with water to catch the tones. 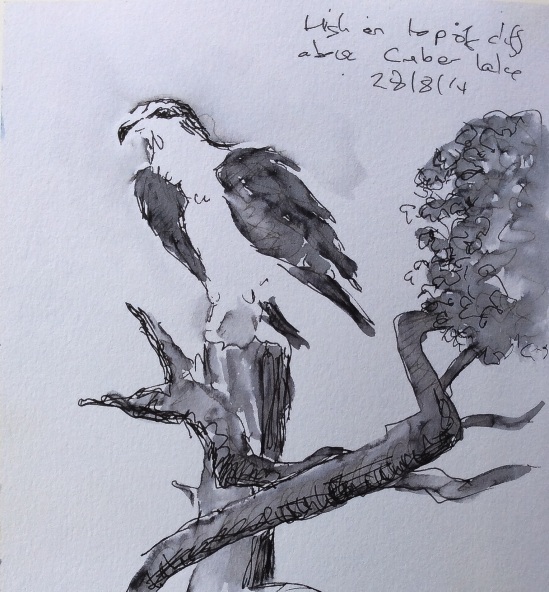 There is no detail for the talons because I could not see them.

There were no vultures to be seen.  I drove back along the high plateau.  Late in the afternoon, near a vineyard and winery at Mortitz, I found a path winding off into the mountains, and from the map, I could see it would eventually reach a spectacular view of the sea.  Posters advertised this was a conservation area for the Bonelli’s eagle and I had picked up intelligence that vultures were encouraged to congregate there.  But it was too late.  I had abandoned my family all day and I could not stay.

This sketch was done in minutes and wholly fails to capture the appearance and mood of the place.  It was like a film setting for a magical tale, perhaps one might see Oberon and Titania laughing at Bottom there.  The bare karst rocks were broken by aromatic greenery and twisted trunks against the backdrop of the limestone heights.

4 responses to “Holiday sketches: last ones”