On the Seabird Painting course, I was struck by the seeming effortless ease with which accomplished artists are able to use tones to build the forms.  Washes merge and blend and separate to make lines and contrasts.  However limited my own efforts appear by comparison, the only way forward is to keep trying. 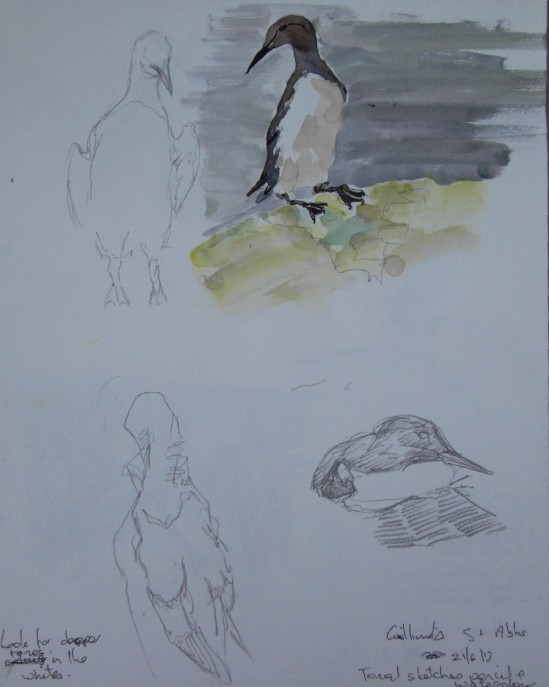 Facing to the rocks, concealing their chicks

This was a quick charcoal sketch at the end of the day, standing, looking down the scope.

Below are others in pencil, pen, pencil with wash and drawing directly in watercolour.  These were all attempts to quickly snatch the shapes of the bird groups congregating across the rock face. 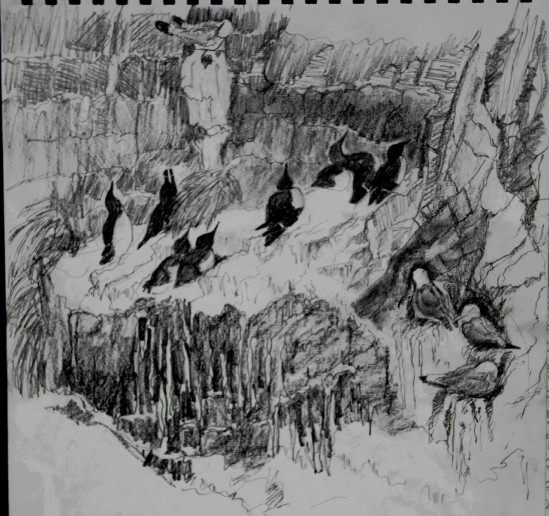 For three days running I perched on the narrow ridges atop steep spurs of rock running out from St Abbs Head into the sea.  The cliffs below and facing me and the tops of isolated stacks were carpeted with nesting birds.  The upper airs were torn by kittiwakes looping in and up to their mates.  Below, the stubby auks, guillemots and razorbills, with fast wings, flew in and out from sea surface to cliff face.  There was constant, compelling noise, the rising and falling crescendo of the guillemots’ harsh croak, the kittewake’s onomatopoeic greetings as they returned to the nest and the threatening cackling of the sweeping watchful herring gulls.

This was my opening sketch, in pencil on cartridge paper.  I was seated awkwardly looking along the side of a rocky spur, close enough the draw partly by eye, partly using the telescope.

A comment from another artist blogger reminded me to post these sketches made while cycling the canal towpaths a few weeks ago. This first one is in a tiny pocket watercolour book.

Here I followed a heron as it flapped a few hundred metres at a time ahead of me. I stopped far enough away to observe it, tonally blending with the bank but reflected in the water.

This abstraction from the scene was drawn in pen during a meeting some days later. 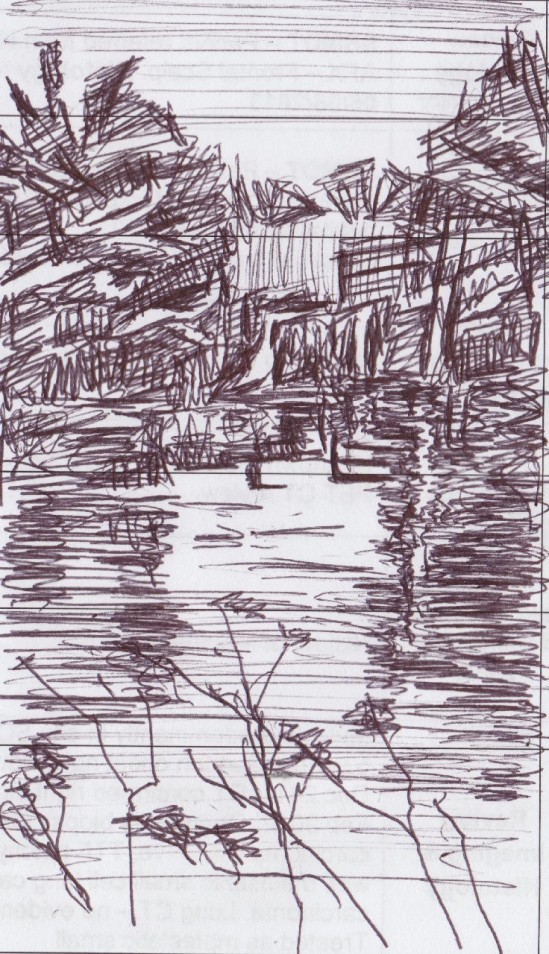 Previously I posted a set of drawings from the YouTube clip of this Mats Ek ballet, with the haunting music from Fläskkvartetten.  Before drawing those pieces, I watched the clip over and over, painting largely without looking on scraps of paper, trying to get the feeling and rhythm of the work. 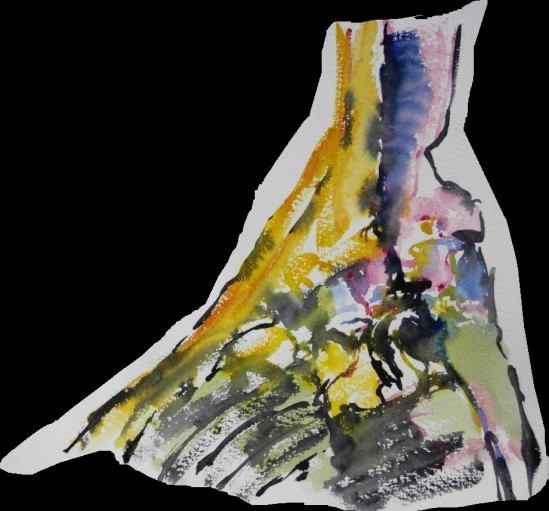 Each time I watch, I am struck by something new.  At the end, how hard she breathes as she beats upon the door.

Two sketches from Dunbar harbour where the kittiwakes nest in the broken surface of the ruined castle walls, building platforms of twigs, human debris and guano.  This first is primarily watercolour over a few pencil lines on rough watercolour paper.

The second started as a continuous line drawn in pencil without really looking at the page, with wash laid over and then further pencil shading for the tone.  It was drawn on cartridge paper with less bite to it than the surface used for the previous sketch. 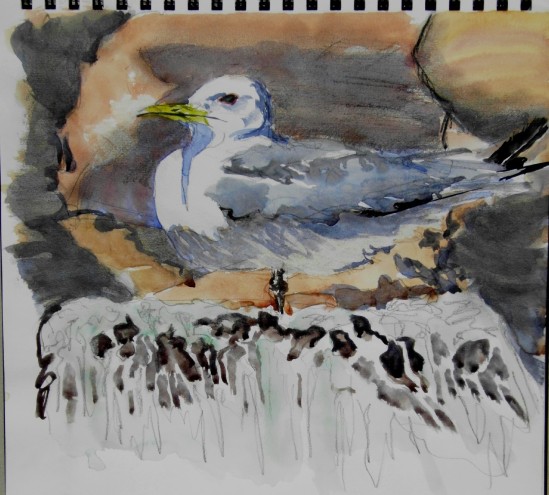 These were on the afternoon of 19th June.  I could see no chicks yet and fewer pairs than last year.  Mark Boyd of the RSPB suggests that kittiwakes have been harmed by our fishing for sand eels and by climate change.

Herring gulls are fascinating marauding predators, commonplace pirates, stealing eggs and chicks.  On Fidra, we were invading their space, the gulls’  territory.  They barked defence calls.  Occasionally, they flew low on our heads …

In this sketch, there are construction lines as I sought the proportions and imagined the relationships between the bones beneath the feathers. I tried to use tone to show how the skull seems to sit distinctly above the neck, more like our own perhaps and very unlike the sleeker serpentine transition in gannets or cormorants. 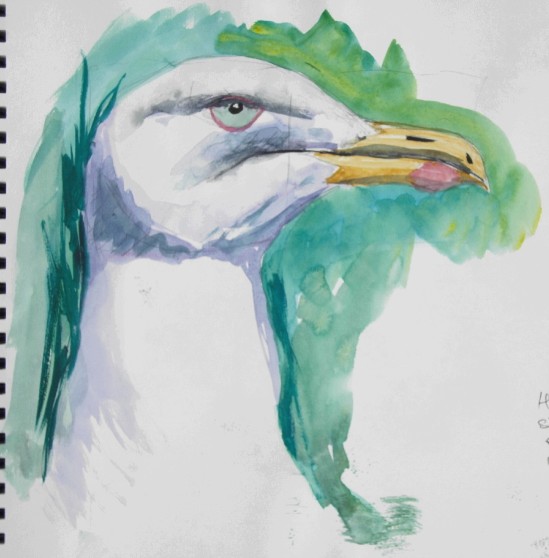 Lesson 1.: I worked in pencil on a large cartridge paper sketchpad and added watercolour wash as an afterthought.   To really exploit the liveliness of paint, I need better paper with sizing and bite.

Lesson 2: I work as if the drawing is the final product (even if I edit it later as in previous posts).  Bad drawings are a disappointment to be abandoned.  Printmaker Kittie produced a large simple drawing of a herring gull that I much admired.  It was immediately apparent that her drawing will serve as the source for printed work.  It seems that drawing for another medium imposes a discipline that gives the artist a particular eye when working in the field.

In June, I spent a morning on the rocky island of Fidra.  A worn paved roadway, with rail tracks and rusting winding gear, rises from the small harbour to the lighthouse.  Everywhere are herring gulls, and at that time, herring gull chicks. Though we saw they cannibalised their own, we were careful where we trod and stayed still for long periods to minimise the disturbance.

Here I sat on the path looking down on the gulls hanging on the wind over the Forth and the mainland beyond.

Gulls hanging in the wind

This version has been edited, bringing in warm colours in the foreground and working, and reworking the gulls the achieve contrast.  I scraped away the line of rock in the mid ground on the left. 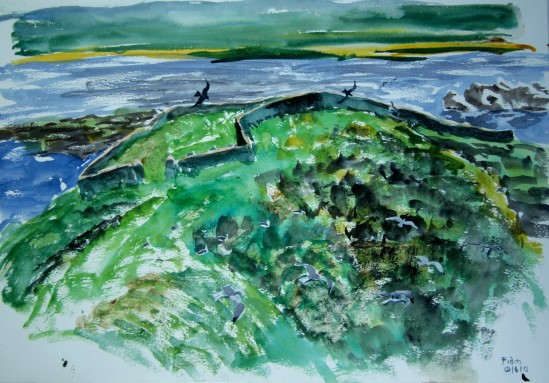 Part way through, I was bombed by a gull, on my hat and scoring a direct hit on the paper.  Interestingly, the guano forms a resist, scattering the paint in a lively way at certain points in the picture.

Greg Poole had pointed out how the rocks on the left seemed stuck to the wall that in reality was in front and higher.  He asked whether I needed to connect this spur to the island with paint, however it appeared to the eye.

However, his key comments were on how the energy flowed through the composition.

These were the comments:

As I painted to the edge of the paper or to the clips holding it to the board, I pulled back the brush (open arrows).  This loses the connection of the subject to its surroundings and dissipates the energy of the composition.  Interestingly, the large blank spaces at both bottom corners hold the picture’s energy because the brush strokes are moving to the centre from the edge (solid arrows) though again perhaps I should have continued the strokes to the lower edge.  Of course I can crop the picture, but even then the strokes within the retained picture have been restrained and diminished.

As I start to write this post, on the iPlayer, Lianne la Havas is playing Glastonbury.  The camera pans across the crowd and drops down on a bloke drawing, I catch a glimpse of her body and guitar in black marker on paper.  That is a moment of drawing energy. 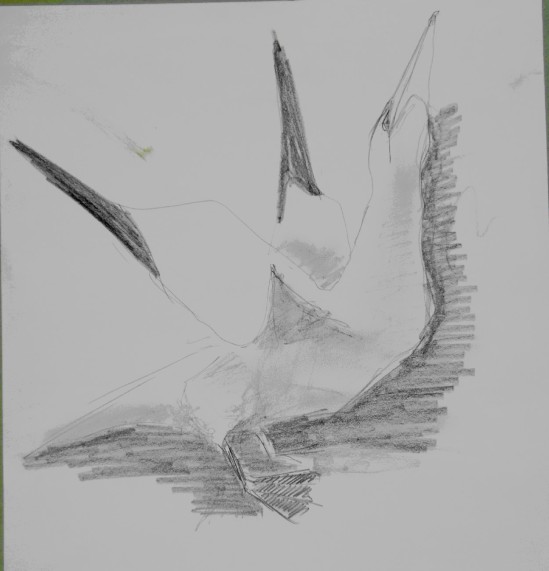 Last week, my second day on Bass Rock, I set out to spend the first hour or so catching the movement of the birds preening, displaying and fighting.  I switched between pencil and a rollerball pen on smooth paper to make those marks fast. 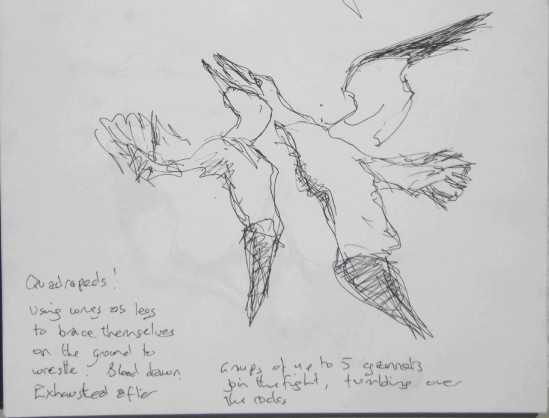 Here I have commented:

Quadrapeds!  Using wings as legs to brace themselves on the ground to wrestle.  Blood drawn.  Exhausted after.  Groups of up to 5 gannets join the fight, tumbling over the rocks. 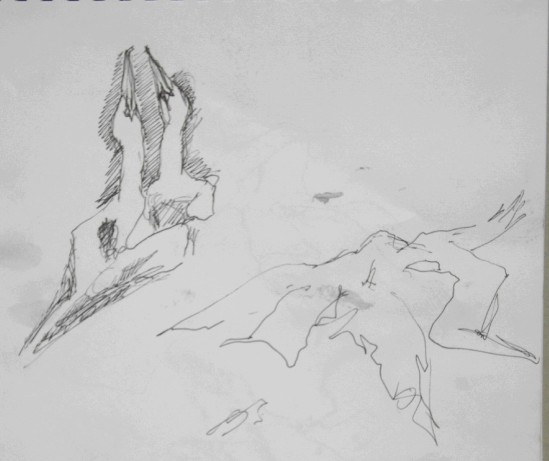 It is one of the tutors, Greg, who comments on another kind of energy within the drawn page.  I just spatter drawings across the paper according to where there is space but the drawings do not relate to each other. 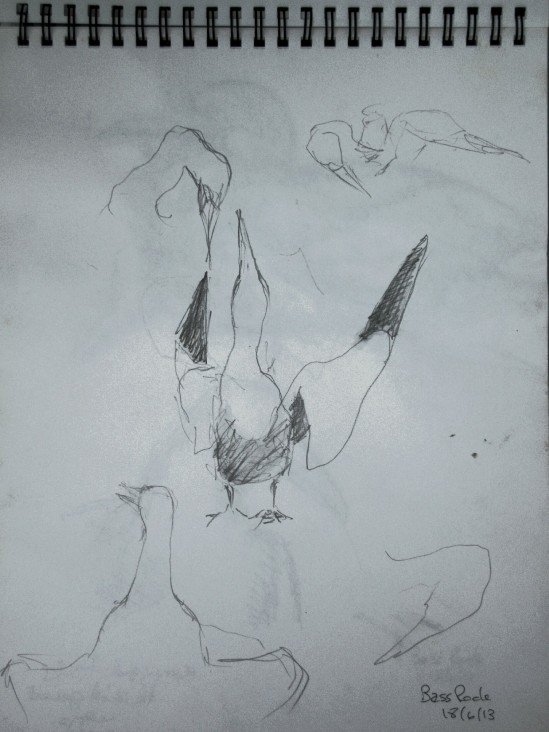 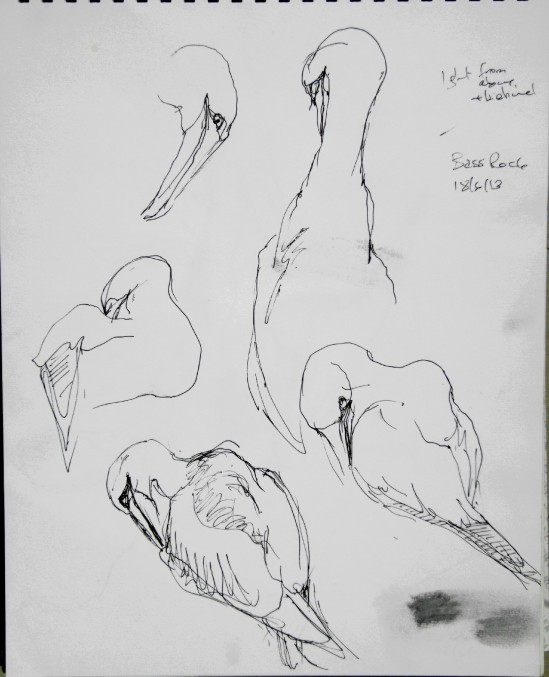 I am still struggling to get Greg’s point.  Is this energy like the organisation of frames in a graphic novel but without the sketches following a narrative?  Perhaps it is similar to the organisation within technical diagrams or on a mind map: cognition expressed on paper.   Perhaps this is more like poetry on paper: no overall composition in the linked sketches yet together they have a dynamic just as sounds might be linked into a whole despite not because of their meaning.

Capturing the shape of the gannet’s head.

After this was said, I began to see that others on the course were doing this as their natural way of drawing.  I do not.  This is another challenge.

This last painting had another energy.  The wind picked up in the afternoon scattering months of fallen feathers, dust and dried guano in all directions, onto paper, into paint, into hair, clothes and mouths.  Some of the texture above comes from this detritus incorporated into the washes.

The swell built below us in the Firth.  After hurried mobile calls, it became clear that if we did not leave now, we would not leave that day, and even now our boat would not be able to come in to pick us up.  Fortunately, the “rib” inflatable craft from the Scottish Seabird Centre was more robust.  It lay lower in the water than the steps from the platform, so we each had to leap with our gear, timing this with the swell.