I walked along side a reservoir high in the north western plateau / mountains in Mallorca.  Each 200m stretch along the path appeared to be a separate territory for an Eleanora Falcon.  These large tailed birds were hovering low over the landscape or perching on rocks, hunting dragonflies I think.  The flat valley floor is walled by high limestone faces on either side.  Looking up, I had a couple of glimpses of circling vultures.

In this sketch, I attempted to balance the tangle of undergrowth shaped by a fallen tree against the calligraphy scored onto the cliff by rainwater.

Later, I found myself looking down a steep rock tumble falling 900m  from where I sat to the town of Soller below and then the distant sea. 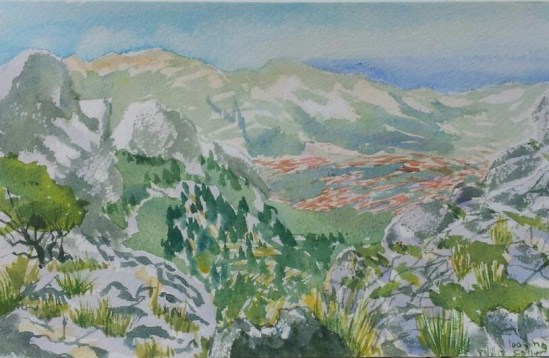