Distant lightning flicked under low clouds and the delayed thunder rolled inland across the estuary.

The eiders had been roosting on the far sand bank.  As the tide seeped in, they shuffled into action, one by one launching themselves to swim up river. 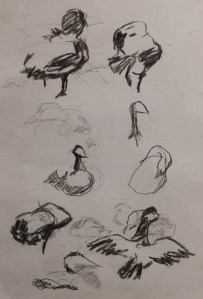 When I was writing this post, I wondered why I had drawn with the charcoal tip and not with the side.  I then remembered that these drawings were done early on that last day of the course.  I was warming up.  Later, I also migrated along the coast.  The drawings of gull chicks posted previously had actually been done later that day.  They were bigger, freeer, more expressive.  Drawing is a process and it was taking time to get my eye, hand and brain into gear.